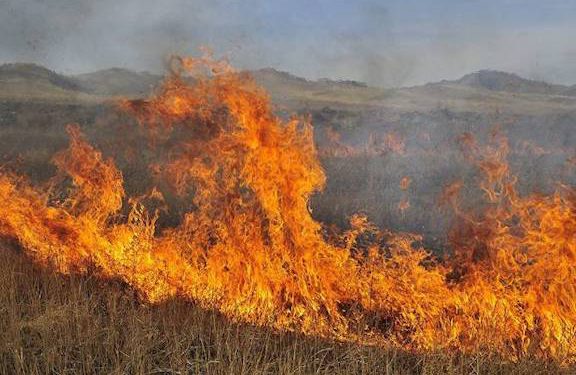 Azerbaijani forces reportedly set fire to lands belonging to Armenians in the Yeraskh region of the Ararat Province, while they continue to shoot at Armenian targets in the same region on Friday.

Armenia’s Defense Ministry reported that at around 12:10 p.m. local time on Friday, Azerbaijani forces used various caliber firearms once again to attack Yersakh. As a result, the grass area in the neutral zone caught fire.

The defense ministry said there were no casualties.

Armenia’s Human Rights Defender Arman Tatoyan said that the Azerbaijani forces were deliberately setting fires to lands privately owned by people and to lands in their immediate vicinity, calling the this tactic “intentional criminal acts of arson,” in a Facebook post.

As a direct consequence of the fires, Tatoyan said, the residents of Yeraskh and neighboring villages are not able to farm their lands. Furthermore, he said, the shootings and the fires have destroyed the peace and normal life of people in Yeraskh especially.

As of 6 p.m. local time, the situation at the Yeraskh section of the Armenian-Azerbaijani border, had stabilized and the fire reportedly has been extinguished, reported the defense ministry.

Mix Media, an Artsakh-based company, filed a report with the prosecutor in March that an unknown source is silencing their lawfully operated radio frequencies.

The subsequent investigation proved that a signal repeating every three to seven seconds is jamming communications and is originates in Azerbaijan.

The investigation also pointed out that the jamming signal changed frequency every time radio operators in Artsakh would change the communications channel.

The prosecutor’s office has shared its finding with law enforcement authorities of Artsakh, as well as the commander of the Russian peacekeeping forces.

Following the Footprints of Armenians in the UAE