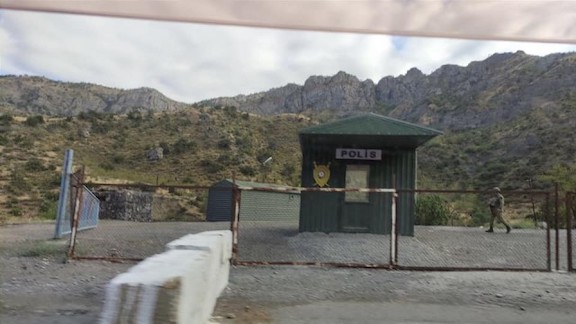 The police checkpoint on Goris-Kapan Highway

Azerbaijani police forces reportedly have set up a check point on Goris-Kapan Highway in Armenia’s Syunik Province, week after blockading the road to through traffic, heightening tensions along the Armenia-Azerbaijan border.

While no official statements have been regarding the check point, reported Anush Mirzoyan posted a photo on social media, lamenting that “Perhaps soon we are going to need permission from Azerbaijan to get from Kapan to Goris,” Yerkir Media reported.

On August 25, Azerbaijani forces blocked the Kapan-Goris Highway along the Karmrakar-Shurnukh section of the road, while a day later the blockade expanded to the Goris-Vorotan portion. Not only was daily traffic impacted by the blockade, but cargo vehicles traveling from Iran to Yerevan were forced either to cancel their transport or seek alternate routes, delaying deliveries.

On August 27, the Goris-Shurnush-Kapan portion of the highway was opened, while cement barricades were placed on the Vorotan and Nor Arajadzor section to slow traffic. The latter position is now under the supervision of Russian border guards.