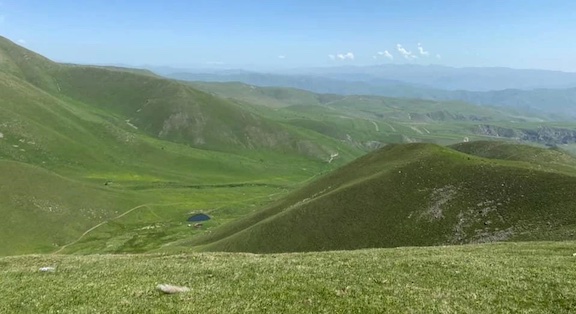 Azerbaijani forces on Tuesday captured another Armenian soldier as the military standoff at the Armenian border continued.

According to Armenia’s Defense Ministry 25-year-old Artur Katanyan strayed into Azerbaijani-controlled territory losing his way due to thick fog.

“When it’s foggy up there locals also often lose their way,” Narek Ordian, an administrator of the Verishen village in Syunik told Azatutyun’s Armenian Service.

Azerbaijani officials were quick to accuse the captured soldier of being a part of a “sabotage group” that was laying landmines in the neighboring Lachin district, which has fallen under Azerbaijani control as a result of the November 9 agreement. Armenia’s Defense Ministry denied the allegations.

The office of Armenia’s representatives at the European Court of Human Rights said on Tuesday that it immediately applied to the court to ensure that the Katanyan’s rights are not violated.

Late Tuesday, however, official Baku claimed that it had returned Katanyan.

“After further investigation it has become clear that the soldier arrested on the Armenia-Azerbaijan border in the Lachin region entered Azerbaijan’s territory not to undertake sabotage efforts, but rather because he strayed there,” the Azerbaijani defense ministry told Interfax adding that Armenian soldier was returned. Azatutyun.am’s Armenian Service first reported of Katanyan’s return.

While Armenia’s defense ministry has not confirmed the Azerbaijani claims, Goris Deputy Mayor Menua Hovsepyan confirmed Katanyan’s return to news.am. Reportedly, Katanyan was released due to the efforts the commander of Russian peacekeeping forces in Karabakh Rustam Muradov.