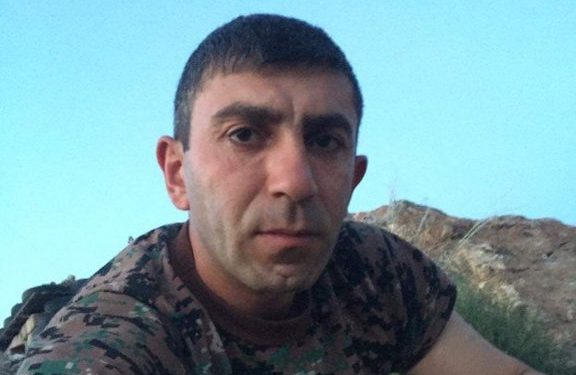 The incident took place in the Yeraskh section of the Armenian-Azerbaijani border at around 10:30 a.m. local time when, according to the Armenian defense ministry, Azerbaijani armed forces attempted to engage in fortification works with the use of engineering equipment aimed at advancing their military positions.

Since May 12, some 1,000 Azerbaijani soldiers have set up positions within Armenian proper after they breached the border with Azerbaijan and advanced their positions in Armenia’s Syunik and Gegharkunik provinces.

Alaverdyan becomes the second Armenian soldier to be killed by Azerbaijani forces in the past two months, as the border standoff between Armenia and Azerbaijan escalates.

Alaverdyan leaves behind a wife and two young children

“The defense ministry of Armenia strongly condemns this provocation by Azerbaijan and warns that it will receive a tough response. The military-political leadership of Azerbaijan bears the full responsibility for the further escalation of the situation,” said Armenia’s Defense Ministery, which also claimed that Azerbaijani forces also “suffered losses.”

In a statement condemning this latest violation of the ceasefire, Armenia’s Foreign Ministry said the provocations prove that Baku is attempting to escalate tensions.

“These provocations, following the recent incursion of Azerbaijani armed forces into Armenia’s sovereign territory—Syunik and Gegharkunik provinces—obviously prove that official Baku is trying to create new centers of tension in order to complicate peace and security in the region,” said the foreign ministry.

“We strongly condemn this encroachment against Armenia, which is also a gross violation of the fundamental principles of the international law,” said official Yerevan. “Such steps by the military-political leadership of Azerbaijan could lead to further escalation of the situation, and the Azerbaijani authorities bear the entire responsibility of its consequences.”

Aliyev Warns Armenia ‘Not to Make Another Mistake’

Aliyev Warns Armenia ‘Not to Make Another Mistake'