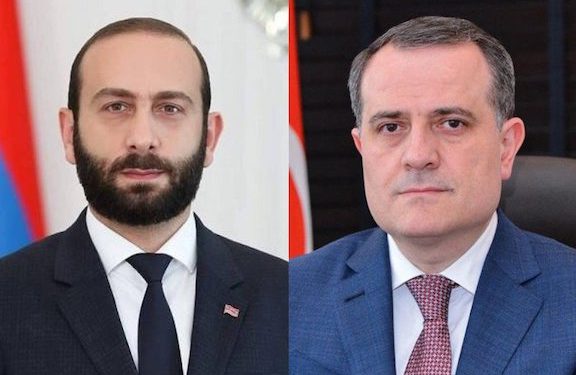 YEREVAN (Azatutyun.am)—Azerbaijan’s Foreign Minister Jeyhun Bayramov cancelled at the last minute a fresh meeting with his Armenian counterpart Ararat Mirzoyan which was due to be held late last week.

\The two men had planned to meet in Stockholm on the sidelines of an annual meeting of foreign ministers of OSCE member states.

An Azerbaijani Foreign Ministry spokeswoman said Baku called off the meeting in response to an Armenian parliamentary delegation’s “illegal visit” to Nagorno-Karabakh. She denounced the trip as a “provocation.”

The Armenian Foreign Ministry reported earlier on Saturday that Mirzoyan’s planned talks with Bayramov did not take place. But it gave no reasons for the cancellation.

The U.S., Russian and French mediators co-heading the OSCE Minsk Group regretted the ministers’ failure to meet for the fourth time in less than three months. In a joint statement issued over the weekend, they expressed readiness to host such a meeting “as soon as circumstances allow.”

An Armenian political analyst, Beniamin Poghosyan, linked the meeting’s cancellation to Baku’s and Yerevan’s failure to put the finishing touches on an agreement to establish cross-border transport connections during the latest round of Russian-mediated negotiations.

The leaders of Russia, Armenia and Azerbaijan reported further progress towards opening the Armenian-Azerbaijani border to passenger and cargo traffic after holding talks in another Russian city, Sochi, on November 26. Russian President Vladimir Putin said a trilateral working group will announce in the coming days “decisions which we agreed today.” The group made no such announcements after meeting in Moscow last Wednesday.

In a separate development, Azerbaijan freed and repatriated on Saturday ten Armenian prisoners of war in return for receiving more information from Armenia about minefields around Nagorno-Karabakh.
The soldiers were captured during the November 16 fighting on the Armenian-Azerbaijani border which left at least 13 troops from the two sides dead.