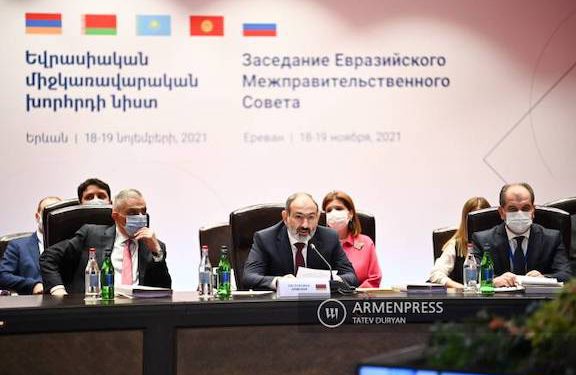 YEREVAN (Azatutyun.am)—Armenian Prime Minister Nikol Pashinyan again accused Azerbaijan of ratcheting up tensions in the region by means of military provocations as he addressed on Friday a Yerevan gathering of heads of government of several former Soviet nations making up the Eurasian Economic Union.

Addressing his counterparts from Russia, Belarus, Kazakhstan and Kyrgyzstan, Pashinyan said on the second and final day of the Eurasian Intergovernmental Council’s workings in the Armenian capital that like last year’s event held after the 44-day war in Nagorno-Karabakh today’s event is also taking place amid a tense atmosphere in Armenia.

“I cannot but notice that just like a year ago, when we were hosting a regular session of the [Eurasian] Intergovernmental Council, today Armenia is facing serious challenges threatening its security,” the Armenian leader said.

“Our region has been plunged into a new phase of tensions, which, unfortunately, led to more loss of life. The responsibility for this lies with Azerbaijan, whose military provocations are aimed at violating the territorial integrity of our country, aborting the agreements reached under the trilateral statements of November 9, 2020 and January 11, 2021,” Pashinyan added.

Simmering border tensions between Armenia and Azerbaijan turned deadly on November 16 as both sides accused each other of large-scale provocations and aggression.

At least six Armenian and seven Azerbaijani soldiers were killed in the fighting that was stopped due to a ceasefire mediated by Russia.

The new border escalation was followed by renewed international calls on Armenia and Azerbaijan to engage in a process of delimitating and demarcating their Soviet-era border.

Pashinyan said on Thursday that a Russian proposal on the “preparatory stage” of the border delimitation and demarcation process was acceptable to Yerevan.

Discussions at the Yerevan sessions of the Eurasian Intergovernmental Council focused on a wide range of issues related to cooperation in the post-Soviet integrational space, including the 2020 situation in mutual trade, the development of the agro-industrial complex, the harmonization of the positions of the member states on the climate agenda, the EEU biosafety strategy, the development of e-commerce, and others.

According to the Armenian prime minister’s office, documents were signed as a result of the sessions.
It was also decided that the next sitting of the EEU Intergovernmental Council will be held in January 2022 in Almaty, Kazakhstan.