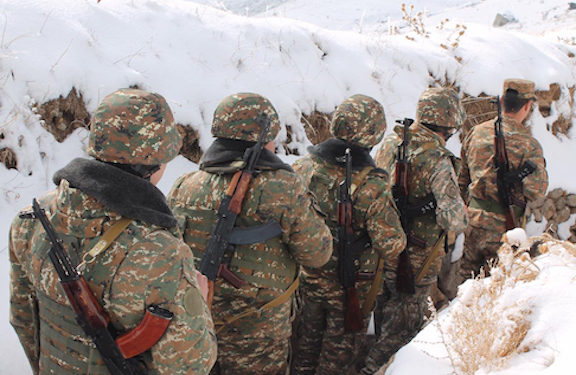 Azerbaijan’s Foreign Minister Jeyhun Bayramov admitted that the country’s forces killed Armenians after the November 9 agreement, claiming that the Armenians who were killed or arrested entered Azerbaijani territory “illegally.”

“The incidents related to the illegal entry of Armenian servicemen into the territory of Azerbaijan at the end of November last year, the death and wounding of Azerbaijani servicemen in December are a war crime committed against Azerbaijan. As a result of the operations carried out by the Azerbaijani special services, some of the Armenian servicemen who carried out provocative and subversive operations were killed and some were arrested. Investigations into the incidents are under way,” Bayramov said Tuesday.

“The reality is that there is an ongoing, open armed conflict. From the point of view of international [humanitarian] law, this means that regardless of whether or not they were taken captive (prisoners of war) after the November 9, 2020 tripartite declaration, they are prisoners of war, captives by legal status; they should be released immediately, without preconditions,” Tatoyan said.

“Azerbaijan is artificially delaying the issue by openly abusing legal processes, presenting them as terrorists and using detention as punishment, in violation of international rules,” added Tatoyan, who emphasized that among the international requirements being ignored by Azerbaijan was the 1949 Geneva Convention.

Tatoyan’s own monitoring efforts, as well as the results of the investigation of the complaints received continuously confirm that the Azerbaijani authorities, in gross violation of international requirements, artificially delay the release of the Armenian captives, and deliberately does not disclose the actual number of prisoners.

“The absolute urgency with respect to the issue of the release and return of captives must be considered in the context of the policy of hate speech and Armenophobia by Azerbaijani authorities,” the Human Rights Defender said.