Baku Condemns Pelosi While Ankara Accuses Her of ‘Sabotage’ 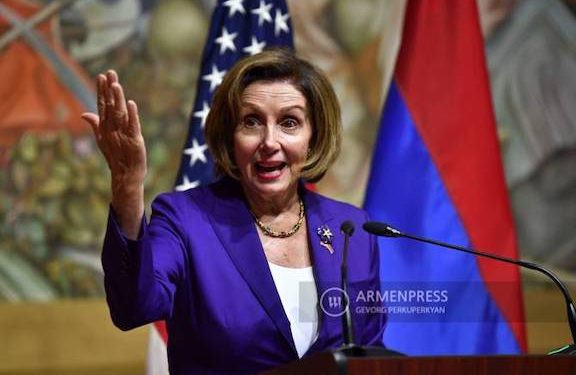 House Speaker Nancy Pelosi delivers an address at the Cafesjian Center for the Arts in Yerevan on Sept. 18

House Speaker Nancy Pelosi’s strong condemnation of Azerbaijan’s “illegal attacks” on Armenia has angered Baku and Ankara, both of which said her remarks were unacceptable.

Pelosi voiced the condemnation on Sunday during a visit to Armenia, where she headed a Congressional delegation along with representatives Frank Pallone, Jackie Speier and Anna Eshoo.

“The baseless and unjust accusations against Azerbaijan made by Pelosi are baseless and unacceptable,” the Azerbaijani foreign ministry said, calling a “severe blow” to efforts to normalize relations between Armenia and Azerbaijan.

“Such one-sided steps and baseless announcements do not benefit the strengthening of the fragile peace in the region. Just the opposite, they exacerbate tensions,” Azerbaijan’s foreign ministry said.

He called on the White House to clarify whether announcements by “Pelosi and a group of officials who enjoy the support of the Armenian lobby reflect Washington’s positions.”

Oktay called on the international community to work “in a responsible manner at a time when there is a need for lasting peace in the region.”

The Kremlin was more subdued in its reaction to Pelosi’s visit to Armenia.

“The Kremlin is willing to welcome House Speaker Pelosi’s visit to Yerevan, if it will help resolve the situation on the Armenia-Azerbaijan border,” the Kremlin’s spokesperson Dimitry Peskov said Monday.

He said that Russia will welcome concrete steps—not just loud an populist words—that can benefit the settlement of relations and stabilization of the borders.