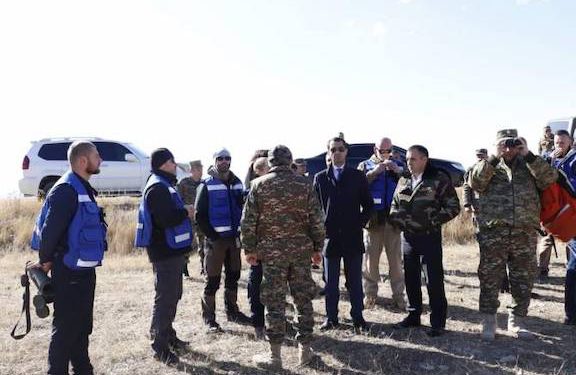 As the European Union announced on Tuesday that its planned civil mission to Armenia will begin in a couple of weeks, Azerbaijan voiced its serious concerns.

Azerbaijan’s foreign ministry on Tuesday said that the EU’s decision to send a long-term mission to Armenia seriously contradicted the agreement reached last fall about such a mission, insisting that several EU countries have shown biased approaches, without elaborating.

Baku warned that the new mission could pose a threat to the negotiation process between Armenia and Azerbaijan.

“The Azerbaijani side anticipates that maximum caution will be shown in the discussion process of starting the activity of the EU mission in order to take the necessary lessons from its past experience,” Azerbaijan’s foreign ministry said, voicing its strong position on several approaches related to the current processes.

Official Baku said “the border delimitation process, which should be carried out exclusively on a bilateral basis, and this activity should not be used in any case to harm the normalization process between Azerbaijan and Armenia.”

“The deployment of the EU’s mission in Armenia should be properly vetted, taking into consideration the legitimate interests of Azerbaijan, and should be implemented in such a way as not to disrupt mutual trust,” Baku added.

The EU’s delegation in Yerevan said the new mission will become fully operational in coming weeks, telling the Armenia’s Public Television that the mission will have up to 100 staff members, including EU experts and observers.

The mission area will cover the entire perimeter of the border with Azerbaijan, including the Nakhichevan section, the EU delegation told Armenia’s Public Television.

It is noted that without affecting the decision-making autonomy of the EU and its unified organizational structure, third countries may be invited to contribute to the Mission on condition that they bear the costs of their seconded personnel, including salaries, all-risk insurance, per diem and travel expenses to and from Armenia, and contribute to the Mission’s operating costs, as appropriate.

The mission is reported to consist mainly of staff seconded by member states, EU institutions or the European External Action Service.

In exceptional cases, in duly justified cases where qualified candidates from member states are not available, third-country nationals may be hired on a contractual basis, depending on the circumstances.

More than 8 million euros have been allocated for the first four months of the mission.

The strategic objective of the EUMA is to help reduce incidents in the conflict-affected and border areas of Armenia, to reduce the risks for the population living in such areas and thereby contribute to the normalization of relations between Armenia and Azerbaijan.

To this end the Mission will promote confidence-building between Armenia and Azerbaijan in ways which maintain its credibility as an impartial interlocutor by: