Baku Signals it Has No Intention to Release POWs 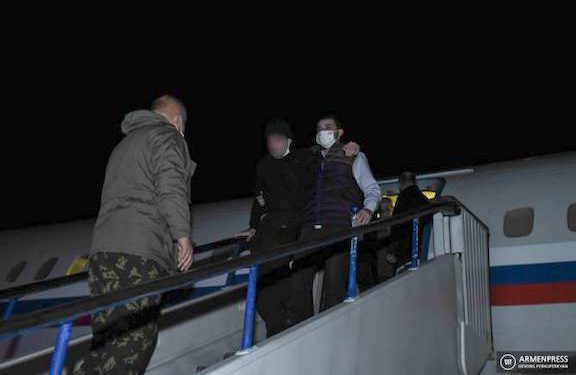 One of the five Armenian prisoners of war is being escorted off a plane that landed at Erebuni Airport on Jan. 28, 2021

While the foreign ministers of Armenia and Azerbaijan were meeting in Dushanbe on Thursday and extolling their commitment to the agreements that call for the release of Armenian prisoners of war, the Azerbaijani foreign ministry made it clear that Baku has no intention of releasing the captives.

The spokesperson for Azerbaijan’s foreign ministry Leyla Abdullayeva launched a full-throttle attack on Yerevan saying that it had no desire to establish peace in the region.

At the heart of Abdullayeva’s rant were comments made by Prime Minister Nikol Pashinyan, who during a speech in the Netherlands this week accused Azerbaijan of using the Armenian POWs as a bargaining chip to advance its own interests.

Abdullayeva called Pashinyan’s remarks “unfounded,” saying they “show that the Armenian leadership is far from being sincere on the issue of normalizing relations between the two countries.”

Pashinyan said during his presentation that Azerbaijan had asked for minefield maps in Artsakh in return for the POWs, adding that Armenia provided all the maps, but Azerbaijan has yet to release all captives.

“The unfounded allegations made by the Armenian Prime Minister against Azerbaijan during his speech at the Clingendael Institute of International Relations in the Netherlands, including untrue accusations on humanitarian issues, show that the Armenian leadership is far from being sincere in the issue of normalizing relations between the two countries,” Abdullayeva said.

“In general, it would be incorrect to describe Armenia’s submission of mine maps to Azerbaijan as a humanitarian gesture, as it was Armenia’s obligation under international humanitarian law after the signing of the trilateral statement. Since the signing of the trilateral statement, 219 people, mostly civilians, have been killed by landmines,” the Azerbaijani foreign ministry spokesperson added.

“(…) the accusation of the Prime Minister of Armenia against Azerbaijan for not taking humanitarian steps and not returning the Armenian detainees is inappropriate and unfounded. It would be good for the Armenian leader to first understand the reasons for the detention in Azerbaijan of saboteurs of Armenian origin who entered the territory of Azerbaijan illegally,” Abdullayeva noted.

“However, the fact that the Armenian Prime Minister is still making baseless allegations against Azerbaijan seriously calls into question the country’s desire to act for peace,” concluded Abdullayeva.