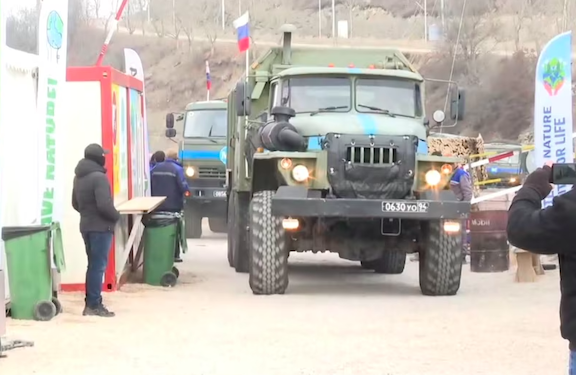 Azerbaijani vehicles on the Lachin Corridor

Azerbaijan has insisted on control mechanisms on the Lachin Corridor during negotiations with the Artsakh authorities last week that were mediated by the Russian peacekeeping contingent. Official Stepanakert has rejected such a demand, citing provisions of the November 9, 2020 agreement.

The details of Baku’s demands were conveyed to RFE/RL’s Azerbaijan service by so-called Azerbaijani expert Farid Shafiyev, who runs an international relations think tank established through an edict by Azerbaijan’s president.

Shafiiyev said that Baku is demanding that the exploration of mines in Artsakh be halted and control mechanisms be installed along the Lachin Corridor to monitor the cargo being transported along the road.

“We have evidence that mines have been transported onto our territory and that the Lachin Corridor was used for non-humanitarian intentions,” Shafiyev told RFE/RL’s Azerbaijan service.

“First and foremost, we are talking about Armenian soldiers who on occasion are passing through the road in civilian clothing, in civilian vehicles, and are transporting military equipment,” the Azerbaijani “expert” alleged.

“Western nation often tell us that we have certain obligations. Yes we do. But on the other hand, that road must be utilized based on its purpose,” added Shafiyev.

After a telephone conversation with his Azerbaijani counterpart Jeyhum Bayramov last week, Russian foreign minister Sergei Lavrov voiced Baku’s claims about the transport of mines to reporters and said that Moscow was investigating the allegations.

“The Azerbaijani side has presented materials suggesting that the Armenian side is transporting mines through the Lachin Corridor. Now our peacekeepers are going over that material,” Lavrov said at a press briefing last week without addressing the main claim being voiced by Baku about environmental concerns.

Despite Baku’s demands for control mechanisms, Lavrov emphasized that the Russian peacekeeping contingent stationed in Artsakh has been charged to monitor and control the road.

“We have proposed something very simple: the peacekeeping mission, which Russia has dispatched in accordance with the tripartite agreement, has been mandated with the task to monitor and control. This mission has the abilities to check whether prohibited items that do not serve humanitarian or civic purposes are being transported,” Lavrov said last week.

Shafiyev, the Azerbaijani expert told RFE/RL that based on his information, there were no tangible results in the negotiations between Azerbaijani and Artsakh delegations. He blamed Artsakh’s State Minister Ruben Vardanyan, saying that he exerted pressure, without providing any proof.

Vardanyan, who was guest on BBC’s Hard Talk program on Sunday said that Stepanakert is ready to negotiate.

“We are ready for negotiations if the Azerbaijani side understands the negotiations are between the two sides. Because what we have said from the first day of declaring independence was that we understand and accept we will be living side by side, but we will be separate territories, and separate states. There will be separate rules and laws because we are a democratic country… We do not see ourselves as part of Azerbaijan, but we respect that we will be living in the same region, and we need to find a way despite all the difficulties to find a solution that will be acceptable for both sides,” Vardanyan told Hard Talk’s host Stephen Sackur.

“Artsakh will not be part of Azerbaijan, this is clear,” asserted Vardanyan.

“In 1988, the people of Artsakh determined that they do not want to be part of Azerbaijan. They have fought for their freedom and have done everything through legal avenues. And today we are posing very succinct question to the world: do we not have a right to self-determination? Especially in a country, which is trampling upon the basic rights of its own people. How can we live in a country, where during the 104-year existence of the Azerbaijan the same family has been ruling it for 44 years?,” Vardanyan told Hard Talk.

The Artsakh State minister added that the United States, France and Russia are convinced that the Karabakh conflict has not been resolved. Baku, however, is categorically rejecting that notion.