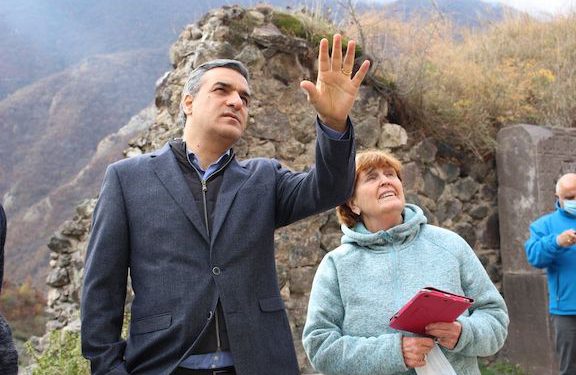 Lord Goldsmith, the Minister of State, Department for the Environment, Food and Rural Affairs and Foreign, Commonwealth and Development Office, said: “The Minister for Europe and Americas has repeatedly highlighted the need for both countries to avoid provocative actions. She has also raised the long-standing issues of prisoners of war, detainees and the missing or deceased in calls with both Azerbaijani Foreign Minister Bayramov and Armenian Foreign Minister Mirzoyan. We urge both Governments to engage in substantive negotiations to settle all matters relating to the conflict.”

Baroness Cox stressed that the impunity enjoyed by Azerbaijan has encouraged continuing violations of the ceasefire agreement by Azerbaijan.

“As Azerbaijani forces continue to advance into Armenian territories, a few weeks ago I visited a village, Davit Bek, in Syunik province, and witnessed the suffering of the Armenian people there. Azerbaijan also refuses to release Armenian prisoners, subjecting many to torture and killing. What will Her Majesty’s Government do to require Azerbaijan to stop violations of the ceasefire agreement and of human rights?” she asked.

“The UK has engaged very actively both during and after the conflict. The Minister for Europe and Americas, Wendy Morton, speaks regularly with her counterparts in both countries. She continuously urges de-escalation and a return to the negotiating table under the auspices of the OSCE Minsk Group, and she has condemned the alleged war crimes, including the deliberate shelling of civilian areas, videos purportedly showing beheadings of soldiers, and alleged deliberate use of white phosphorus against civilians. The allegations come from both sides in this conflict,” said Lord Goldsmith.

Lord Bishop said he visited the border inclusion area of Syunik province, at an earlier stage than Lady Cox.

“In Khoznavar, the incursion had cut off the nearby village from its main water source, and access to grazing land had been denied, threatening the survival of this poverty-stricken village. Following my letters of 7 July to the Foreign Secretary and of 5 November to the Minister for Europe and Americas, what further steps are Her Majesty’s Government taking to challenge those illegal incursions, to ensure the integrity of Armenia’s borders and to press for the withdrawal of Azerbaijani troops according to the terms of the November 2020 ceasefire?” the Lord asked.

“The UK notes the ceasefire agreement reached in November last year. Both countries had to make difficult decisions to secure stability and peace, and it is important that remaining issues relating to the conflict are resolved through negotiation. In particular, the OSCE Minsk Group is the obvious and key forum for this, facilitated by France, Russia and the US. The UK is not a formal member of the OSCE but we continue to support its efforts to negotiate a permanent and sustainable settlement,” Lord Goldsmith added.

Lord Risby emphasized that the major cause of tension and violence has been the lack of a clear and mutually acceptable demarcation of the international border and asked whether the UK considers assisting or promoting the process.

“The UK supports the OSCE Minsk Group process and, alongside that, the basic principles. Last updated in 2009, these include a return of the occupied territories and the acceptance of a free expression of will on the status of the Nagorno-Karabakh region,” Lord Goldsmith responded.