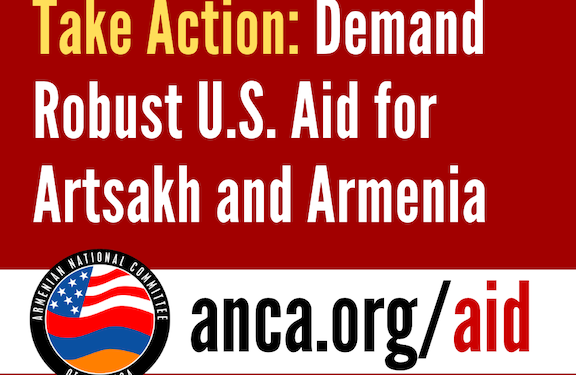 WASHINGTON—The Biden Administration called for a mere $24 million in U.S. assistance to Armenia in the Fiscal Year 2022 foreign aid budget issued Friday, a standard request that fails to address the ongoing humanitarian and economic disaster caused by Turkey and Azerbaijan’s attacks against Armenia and ethnic cleansing of Artsakh last fall, reported the Armenian National Committee of America.

“President Biden’s business-as-usual budget for Armenia – proposed amid a humanitarian crisis across Artsakh and Armenia created by Azerbaijan’s aggression – falls far short of the desperate needs faced by tens of thousands of Armenians displaced by Baku’s ethnic-cleansing,” said Aram Hamparian, Executive Director of the ANCA.

“Our government has found the funds to ship $120,000,000 in U.S. military aid to oil-rich Azerbaijan, yet proposes just a fraction of this amount for the Artsakh families destroyed and displaced by the U.S.-financed Azerbaijani army. The Congress needs to set this right – zeroing out all U.S. arms and aid to Baku and sending a robust U.S. assistance package to Artsakh and Armenia,” added Hamparian.

The President’s budget includes $23,405,000 in foreign aid and $600,000 in military assistance to Armenia.  A separate line item in the budget calls for $6,050,000 in International Narcotics and Law Enforcement spending in Armenia.

Earlier this year, a bipartisan group of over 65 U.S. House members joined in the Congressional Armenian Caucus request for an FY2022 allocation of over $100 million in U.S. aid to Armenia and Artsakh, an effort broadly supported by the ANCA.

Community members and coalition partners interested in supporting a $250 million aid package for Artsakh and Armenia can take action.