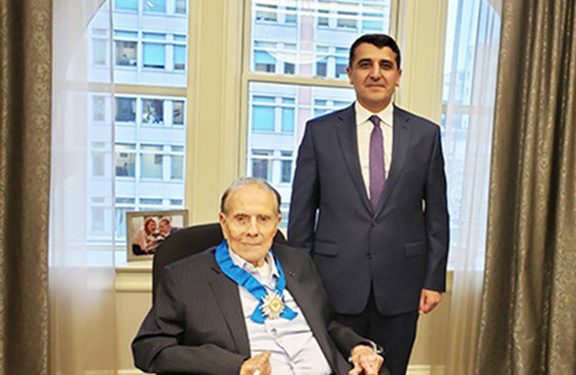 Bob Dole, a Republican Senator from Kansas who rose to become Majority Leader and later nominated as the Republican Party presidential candidate in 1996, passed away on Sunday. He was 98.

His affinity for Armenians and the Armenian cause came from Dr. Hampar Kelikian, who helped Dole recover from serious injuries during World War II. Kelikian shared the story of his family who experienced unfathomable horrors during the Armenian Genocide.

Dole became a staunch advocate for the recognition of the Armenian Genocide and in February 1990 fought for the passage of a resolution, which would ultimately not pass, due to a filibuster by Virginia Democrat Robert Byrd.

“For the one million Armenians in this country, the wounds have been open for almost 75 years, and the hurt is not going to be able to heal because the world has not faced up to the truth of the suffering of the Armenian people in this period of 1915-1923…because the world stood by and did nothing,” Dole said on the Senate floor during the debate on the resolution in 1990.

“Dole had planted a seed and finally lived to see the House of Representatives, Senate, and the Executive Branch end the longest-lasting foreign gag rule in American history and dealing a major setback to Turkey’s century-long obstruction of justice for this crime against humanity,” said the Armenian National Committee of America-Western Region in a tribute posted on the organization’s social media platforms on Sunday.

Dole hailed President Joe Biden’s recognition of the Armenian Genocide this year, calling it a pound moment for the United States.

“I’m very pleased that he [President Biden] has officially recognized the Armenian genocide. This is a proud and historically significant moment for the United States, for Armenia, and for Armenians around the globe. It’s been a long time coming,” Dole said.

He and his wife, Elizabeth, who would later become the president of the American Red Cross, traveled to Armenia in 1989 and assessed the damage of the devastating earthquake.

Mere weeks before last year’s 44-Day War, Armenia’s then Ambassador to the United States Varuzhan Nersesyan signed an agreement with the law firm Alston & Bird, where Dole would assist Armenia in building a strategic partnership with the United States.

In December 2019, Nersesyan presented Dole with Armenia’s Order of Honor medal for his unwavering commitment to Armenia and the Armenian people.

“America lost a worthy son and soldier, and the Armenian people lost their great and loyal friend, who was closely connected with us, Armenians, and was always by our side, especially during trying times,” President Armen Sarkissian said in a tribute to Dole on Monday.

“After the devastating earthquake of 1988, Robert Dole visited Armenia and played an indisputable role in the organization of US humanitarian aid to our country. His efforts to recognize the Armenian Genocide are also invaluable,” said Sarkissian said, adding that “Mr. Dole’s the memory will always be bright in our hearts.”