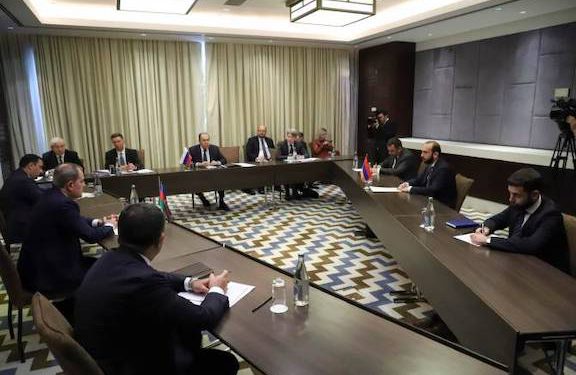 The foreign ministers of Armenia, Azerbaijan and Russia meet in Dushanbe, Tajikistan on May 12

A commission that will oversee the delimitation and demarcation of borders between Armenia and Azerbaijan will hold its first meeting next week in Moscow, Armenia’s Foreign Minister Ararat Mirzoyan told his Russian counterpart Sergei Lavrov during a meeting on Thursday.

The commission, which was conceived during a meeting in Sochi in November, is to be headed by the Russian, Armenia and Azerbaijani deputy prime ministers.

Mirzoyan told Lavrov during their meeting in Tajikistan’s capital of Dushanbe, that he had discussions with “Azerbaijani colleagues” with whom they have advanced talks about forming a commission, adding that Russia’s Deputy Prime Minister Alexei Overchuk has agreed to host the meeting in Moscow from May 16 to 17.

Lavrov also mediated a meeting between Mirzoyan and his Azerbaijani counterpart Jeyhun Bayramov. The three top diplomats reportedly reaffirmed their commitments to the agreements signed by the leaders of Armenia, Azerbaijan and Russia, which involve unblocking of regional transport and economic ties, demarcation and delimitation of borders and an agreement on normalization of relations between Armenia and Azerbaijan.

According to Armenia’s foreign ministry, Mirzoyan reiterated Armenia’s position about guaranteeing the security of Artsakh Armenians, their rights and freedoms, as well as the status of Artsakh within the framework of a comprehensive settlement of the Karabakh conflict.

The Armenian foreign minister, reportedly, also stressed the need for an immediate solution to the humanitarian problems created by the 44-day war, including the need for the immediate repatriation of Armenian prisoners of war.

Thursday’s meeting between Mirzoyan and Bayramov was organized by Russia, presumably in hopes of asserting its control over the talks and the processes in the South Caucasus. Last month, Moscow accused Western powers of usurping its initiatives, after the European Council President Charles Michel hosted a meeting between Prime Minister Nikol Pashinyan and President Ilham Aliyev of Azerbaijan in Brussels.

“I hope that today’s meeting will make it possible to move forward along the path that was outlined by our leaders,” Lavrov said, according the RIA Novosti news agency.

“We believe that there is a good prospect, a good opportunity to achieve … the full implementation of the tripartite statements in full,” Bayramov said, for his part.

In a statement issued after the talks, Russia’s foreign ministry said the three ministers “reaffirmed the commitment to strict compliance with all provisions” of the agreements reached between the leaders of Armenia, Azerbaijan and Russia. The statement also added that Mirzoyan and Bayramov discussed negotiation over a so-called “peace treaty,” which Moscow has signaled it would help facilitate.

Baku Signals it Has No Intention to Release POWs