Brawl in Parliament After Opposition Lawmaker is Removed for Challenging Pashinyan 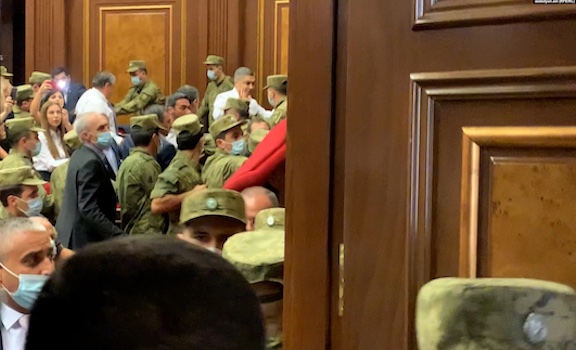 A brawl in Armenia's Parliament on Aug. 24 was captured by RFE/RL cameras

YEREVAN (Azatutyun.am)—Security guards removed an opposition lawmaker from the parliament after she challenged Prime Minister Nikol Pashinyan, calling him and his loyalists defeatists, during his presentation of a five-year government action plan on Tuesday, sparking a brawl in the chamber.

Before putting her question to Pashinyan, Anna Mkrtchyan, a member of the opposition Pativ Unem faction, criticized the prime minister for entering the parliament chamber with his bodyguards, something that she said was unprecedented for Armenia’s National Assembly.

Mkrtchyan said that the presence of whom she described as “okhranniks,” using a Russian word for guards, in the parliament chamber was now a reality that remained unseen for the public at large.

During a debate in parliament earlier this month Simonian already once reprimanded Mkrtchyan for speaking impolitely about the prime minister and calling him a defeatist, later depriving her of the floor and ordering her removal from the chamber.

Another Pativ Unem lawmaker Tigran Abrahamyan inquired from Prime Minister Pashinyan about how he treated the remarks made by his teammates against Mkrtchyan. Pashinyan replied that his teammates reacted quite restrainedly.“I would say that they even reacted softly,” he said.

Mkrtchyan reacted to the prime minister’s words from her seat, after which Parliament Speaker Simonian ordered security guards to remove the opposition lawmaker from the hall.

“I ask the security to escort Ms. Mkrtchyan out in accordance with Article 52 of the Rules of Procedure,” said Simonyan, announcing a 20-minute break.

The entry of security guards into the chamber sparked a brawl between them and representatives of Pativ Unem and the other opposition faction, Hayastan.

When the session resumed, Hayastan’s lawmaker Artur Ghazinyan accused Pashinyan of provoking the incident with his remarks. Pashinyan later dismissed that accusation repeated by another Hayastan faction member Artsvik Minasyan, saying that security guards and the parliament speaker have been doing their duty.