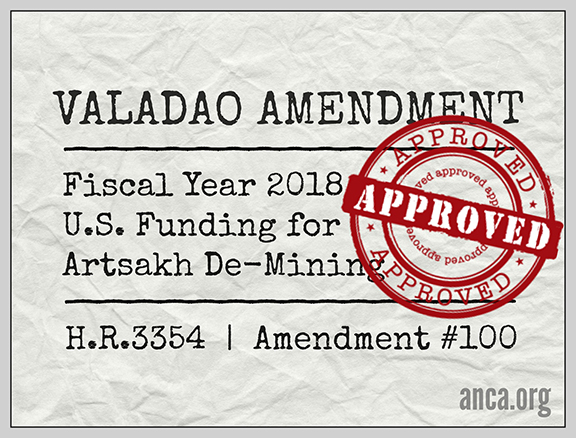 WASHINGTON – The U.S. House today adopted an amendment by Rep. David Valadao (R-CA) backing continued Congressional appropriations for the HALO Trust’s life-saving de-mining across the interior farmlands and villages of the Artsakh Republic.  The decisive move was welcomed by the Armenian National Committee of America (ANCA), which spearheaded the launch of Artsakh aid in the 1990s and has, over the past two decades, secured tens of millions of dollars in life-saving U.S. assistance to the independent republic.

The Valadao Amendment was approved by voice vote, as part of the FY 2018 foreign aid appropriation, which, in turn, is part of a broader spending measure (H.R. 3354), which will be voted on as early as Friday, September 8th.  Congressman David Valadao (R-CA), who serves as a Co-Chair of the Congressional Armenian Caucus, was joined in supporting this bipartisan measure by House Foreign Affairs Committee Chairman Ed Royce (R-CA), House Intelligence Committee Ranking Democrat Adam Schiff (D-CA), and his fellow Armenian Caucus Co-Chairs Frank Pallone (D-NJ) and Jackie Speier (D-CA).  Rep. Valadao introduced his measure on the House floor, as part of an en bloc series of amendments, and spoke passionately in support of its adoption.

“Progress for Artsakh. The Valadao Amendment’s overwhelming adoption by the full U.S. House of Representatives powerfully affirms, over Aliyev’s relentless opposition, America’s enduring support for Artsakh’s safety and security,” said ANCA Chairman Raffi Hamparian.  “We join with friends from Fresno, across America, and from as far away as Artsakh in thanking Congressman Valadao and all his colleagues for his leadership in the victory of this pro-peace, life-saving legislation.”

Immediately following his amendment’s passage, Rep. Valadao shared with the ANCA that: “It is a grave reality that families in Nagorno Karabakh live under the very real threat of landmine accidents each and every day. However, with the funding secured in my amendment today, I am optimistic significant strides will be made to ensure the region is landmine free by 2020, restoring these communities so they may live without fear of mine-related accidents.”

Rep. Speier thanked her colleagues for “providing critically needed funding for the ongoing effort to remove deadly landmines from Artsakh. Given the danger posed to the people of this Republic – an area that suffers the highest per capita incidence of landmine accidents in the world, with a third of these casualties involving children – this modest $1.5 million amendment is destined to have a major impact on the physical and mental health of the people of Artsakh. It is also shows our government’s strong and abiding commitment to securing peace and prosperity for Artsakh, which has achieved great progress and has an even brighter future on its horizon.

The Valadao Amendment represents the first time in four years that the full U.S. House has gone on record affirming its official support for the Artsakh assistance program.  The Senate has traditionally been more consistent in its support in this area.  The Executive Branch is responsive to Congressional intent, as reflected in legislative and report language, particularly on appropriation priorities.

Thanks to the efforts of the ANCA and the leadership of Senator Patrick Leahy (D-VT), former Senator Mark Kirk (R-IL), Congressional Armenian Caucus Co-Chair Frank Pallone and former Republican Co-Chair Joe Knollenberg (R-MI) and many others – the U.S. has provided millions in funding to The HALO Trust, which has successfully demined approximately 97% of Artsakh. Over the last 16 years, the HALO Trust has destroyed over 8,733 anti-personnel mines, 2,584 anti-tank landmines, 180,858 small arms ammunition, 12,423 cluster bombs and 48,572 other explosive items.

The ANCA’s efforts to secure direct U.S. assistance to Artsakh date back to May of 1997, when Congressman Brad Sherman first offered an authorization amendment, as a member of the House Foreign Affairs Committee, to the Foreign Policy Reform Act, to authorize direct U.S. funding for Artsakh. This effort lead to subsequent support, later that same year, by appropriators, notably then-senior Congressman Joe Knollenberg of Michigan, who successfully worked to ensure that the House Appropriations Committee approved a Foreign Aid bill (Public Law 105-118) that ultimately led to the allocation of an initial $12 million FY 1998 allocation for Artsakh. 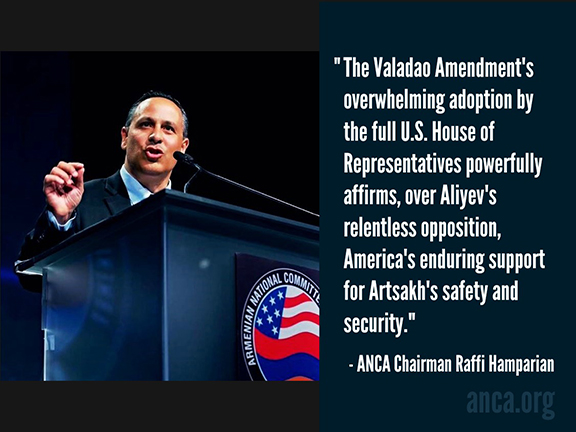 In addition, the Senate Appropriations Committee adopted three ANCA-backed amendments including one, led by Senator Chris Van Hollen (D-MD) and Committee Vice-Chairman Patrick Leahy (D-VT) opposing the use of US funds to facilitate the sale of arms to Turkish President Erdogan’s security detail; as second amendment by Senator James Lankford (R-OK) denying U.S. visas to Turkish officials involved in the unlawful imprisonment of U.S. citizens; and, the third by Senate Assistant Democratic Leader Richard Durbin (D-IL) denying U.S. visas to Azerbaijani government officials connected to the improper jailing of the editor of the independent Turan News Agency.

U.S. Calls on Azerbaijan to Return Troops to Initial Positions