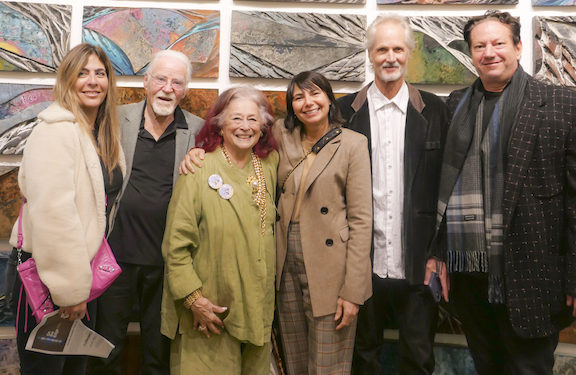 BAKERSFIELD, Calif.—A never-before seen exhibition made its debut at the Bakersfield Museum of Art. “On the Edge”: Los Angeles Art, 1970s – 1990s, from the Joan and Jack Quinn Family Collection, is an intimate display of over 150 objects from some of the 20th century’s most famous Contemporary artists including Ed Moses, Lynda Benglis, Peter Alexander, Frank Gehry, Robert Graham, and Ed Ruscha. The exhibition opened on Thursday, September 30.

“The work and artists on display have come to represent a period of history that transformed art making,” said Bakersfield Museum of Art (BMoA) Curator of Exhibitions and Collections Rachel McCullah Wainwright. “Art made in Los Angeles during the late 1960s and 1970s onward is defined by a unique spirit of anti-conformity, a play of new materials and a celebration of light and the California cool ethos. It is exciting that so many of these artists are still with us and able to share their work and the experience of working during this period.”

Part of what makes the collection so unique is its foundation in friendship between collector and artist.

The friendship formed from a commitment by art lover Joan Agajanian Quinn and her husband, attorney Jack Quinn (d. 2017), to support and promote a creative community experiencing a new found freedom.

Newly married in the 1960s, Joan and Jack took to collecting early. “We reveled in our friendship with the artists by buying their work and introducing them to gallerists,” notes Quinn. Herself a society columnist for several publications, including Andy Warhol’s Interview magazine and the Los Angeles Herald Examiner, Joan ensured her favorite artists appeared in the society columns of important magazines and newspapers. Jack promoted them by giving lunches and cocktail parties within the legal community.

Enduring friendships developed between the Quinn family and artists like Billy Al Bengston, Andy Warhol, David Hockney, Frank Gehry, Laddie John Dill, and others. “Our accumulation of art is so personal that we have drawings on napkins, sketches on place mats, bags and jewelry made from studio residue,” said Quinn.

Known for her charisma, intelligence, and flamboyance, Joan Agajanian Quinn has been a muse for artists such as Jean-Michel Basquiat, Larry Bell, Bengston, Gehry, Hockney, Antonio Lopez, Moses, Helmut Newton, Zandra Rhodes, Ruscha, and many others. As artists sought to record her image across a variety of media, Quinn has found herself with one of the world’s largest and most important 1/2 collections of Contemporary portraiture—a poignant representation of friendship, appreciation, and respect. More than 50 such portraits of the Quinn family are included in “On the Edge.”

The Bakersfield Museum of Art’s mission is to inspire and engage diverse audiences by providing a broad spectrum of creative visual arts experiences through the exhibition and preservation of fine art, educational programs, community outreach, and special events. BMoA is open Tuesdays through Saturdays from 10 am to 4 pm. Call (661) 323 – 7219 for more information.