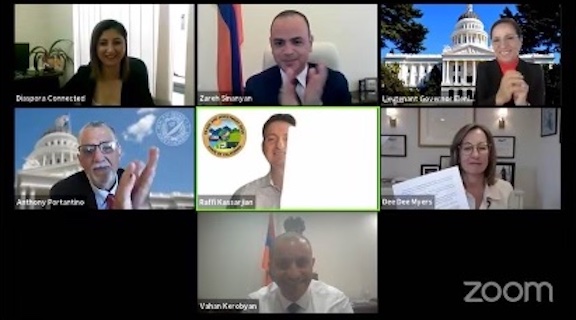 The participants of the MOU signing ceremony

A Memorandum of Understanding was signed Tuesday between the Governor’s Office of Business and Economic Development and Impact Hub Armenian Social Innovation Development Foundation to establish a Trade and Services Desk in Armenia.

Taking part in the signing ceremony, which was live-streamed, were California Lieutenant Governor Eleni Kounalakis, Dee Dee Myers, the director of the Governor’s Office of Business & Economic Development and Senator Anthony Portantino who spearheaded the effort when he introduced and successfully shepherded a passage of a resolution in the state legislature. Armenia’s High Commissioner for Diaspora Affairs Zareh Sinanyan and Raffi Kassarjian from Impact Hub Yerevan represented Armenia during the ceremony.

“Formal trade relations between California and Armenia have long been a priority of the Armenian American community in California,” stated Portantino.

“I am proud to have helped launch this historic trade opportunity and to have it set up in Yerevan is of particular importance to me and Armenian neighbors across the 25th Senate District.  I am incredibly grateful to Governor Newsom, High Commissioner Sinanyan, Lieutenant Governor Kounalakis, and GO-Biz Director Dee Dee Myers for their leadership and commitment to this important endeavor.”

In September 2019, California Governor Gavin Newsom and Armenia’s then foreign minister Zohrab Mnatsakanyan signed a memorandum of cooperation between Armenia and California.

“Starting with Jack Scott in 2001, and continuing to today, many people and organizations have pursued and encouraged a formal relationship between California and Armenia. I have been blessed to represent the legislative district with the largest Armenian American Community in the country and to have worked closely with local Armenian leaders to bring this recent effort to the forefront,” said Portantino in an article he authored for Asbarez.

“For over a decade, the California Armenian American community has wanted to rekindle formal economic ties with Armenia… In concert with this effort, Lieutenant Governor Eleni Kounalakis was tasked by Governor Newsom to spearhead California’s international efforts. The newly established Trade Desk will be under her purview and be placed in the Governor’s Office of Business Development,” explained Portantino in the 2019 article.