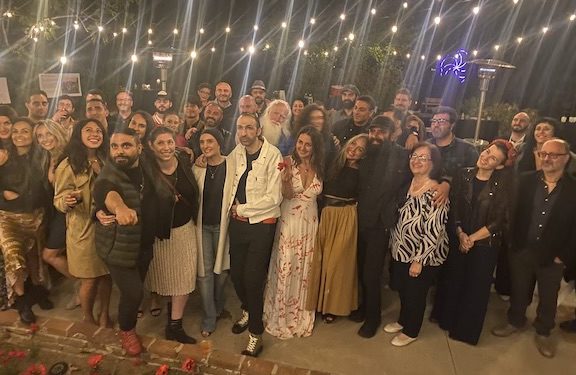 Artists, musicians, and community members gather for a photo at the closing of the event

A captivating evening of live music and art drew a crowd of more than 150 community members to Altadena, CA, where singer and songwriter Sebu Simonian hosted a fundraiser for Artsakh. The event, held on Sunday, September 26, served as a collective giving opportunity to raise money for Support Our Heroes – a non-profit organization that provides aid to Armenians displaced from their native lands, as well as veteran servicemen and their families. A total of $170,000 was raised for the cause.

As guests gathered at the private residence on Sunday evening, they were invited to participate in a silent auction that featured a selection of pieces created by diasporan Armenian artists. Event curator Ani Ohanessian emphasized that the artworks on display had been donated by the artists and that the proceeds would support SOH’s Tever IT Center and Nakhijevanik Homes projects.

According to Ohanessian, only one artist, Armen Sayar, would receive a portion of the proceeds from the sales of his work. Sayar was born and raised in Stepanakert, Artsakh, where he met Sebu in 2019. As a result of the 2020 Artsakh War, Sayar and his father had to flee their home and reestablish their lives in Armenia. Guests interested in supporting Sayar and his work had the opportunity to place bids with Ohanessian.

“With what has happened recently in Armenia and Artsakh, and has historically been happening, I believe that it’s really our art and culture that has pushed us forward,” noted Ohanessian, who highlighted the importance of raising awareness through music and art. “This is how we leave our mark,” she said.

“As artists this is our battlefield, and the only way that we can combat a force that’s trying to erase not just the territory you hold but the culture that you represent is by creating more,” said artist Sevag Mahserejain. “It’s a powerhouse of artists that have come together to create and to remind people that this is happening.”

Outside, a noteworthy piece on display was the “Eternal Armenia” installation, by artists Margarita Simonian, Vreje Bakalian, and Yeva Babayan. Programmed with LED lighting, the piece is an 18ft tall Armenian symbol of eternity that was previously installed at Glendale’s Central Park.

To the left of Babayan’s piece was a stage, projector, and screen that were used to present clips from documentaries highlighting the current situation in Artsakh. Segments from Mariam Avetisyan’s “The Desire to Live” and Emile Ghessen’s “45-Days,” two documentaries that were recently released, were played for attendees. Later, clips from a documentary made by Taline Kevonian, who has been on the ground in both Armenia and Artsakh since the very beginning of the 2020 Artsakh War, were played.

“With accessibility having become such an integral commodity, this event serves as a catalyst for great artists, musicians, and the community to come together, feel together, and give together to the soldiers who need us the most right now as they continue to secure the peace for Artsakh and Armenia,” said Nadia Simon, an attendee.

“Music and art are my world, and to be able to use that to benefit our people in any way is an honor for all of us – all the artists here,” said Tankian, who not only performed but also donated artwork.

For Sebu, SOH holds a special place in his heart, as it’s an organization co-founded by his father, Hratch Simonian. Simonian and Viken Arabian created SOH in 2016 in response to the Four-Day-War. They have actively supported Armenians from Artsakh through the organization’s many projects and have doubled their efforts since the start of the 2020 Artsakh War.

According to Hratch’s wife, Seta Simonian, the music and art are remarkable, but “the cause is even more important.” Seta firmly believes that it is the Diaspora’s duty to “to make sure the people there [in Artsakh] live happily and in a safe environment.”

After attending a fundraising event recently hosted by his father, Sebu was inspired to host one of his own. Instead of taking the more old-fashioned approach to fundraising – a sit-down dinner with a lineup of guest speakers – he decided to integrate music and art into a fundraising project. “I wanted it to be, not a celebration, but an experience—a cultural experience,” said Sebu.

By recruiting musicians and artists from his circle of friends, Sebu was able to successfully bring together a community to fundraise for Artsakh. He created a space for the new and old generation of Armenian artists to display their works, network, and most importantly raise money for SOH.