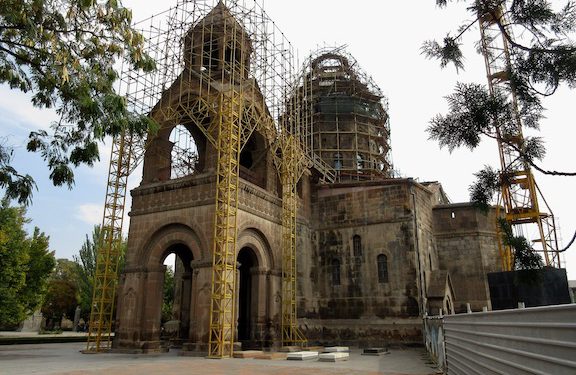 The Holy Etchmiadzin Cathedral surrounded by scaffolding while under renovation

Metal Alchemist, the new jewelry brand by Alex and Ani founder Carolyn Rafaelian, announced Thursday it was partnering with Cher to help raise funds to restore the Etchmiadzin Cathedral in Armenia – the oldest cathedral in the world, the Boston Globe reported.

Eric Esrailian, a California-based physician, film producer and entrepreneur, is the third partner on the Rhode Island-based company’s first charitable initiative. The jewelry line, dubbed “Alchemy for Armenia,” consists of “posy” wire bracelets engraved with the first word’s of the Lord’s Prayer “Our Father” in Armenian, “Հայր մեր.”

According to Rafaelian, 100 percent of the profits from the sale of the posy wire bracelets will be donated to the Armenian Apostolic Church for the restoration and preservation of Etchmiadzin and the Khor Virap Monastery and Church Complex. Depending on the metal, the bracelets range in cost from $28 to $128 each.

In a statement sent to the Globe on Thursday, Cher said preserving and restoring the Etchmiadzin Cathedral and Khor Virap will also “preserve the rich faith, history and culture” of Armenia.

“It’s important that future generations are able to visit and appreciate this historic church,” said Cher. “My Armenian roots are a huge part of who I am, and I am thrilled to be a part of such a worthwhile cause.”

Businesswoman Kim Kardashian, who also has Armenian roots, posted about Metal Alchemist’s new line on her Instagram stories on Thursday.

“I’m always looking for ways to support Armenia and the most sacred, ancient places in the world,” said Kardashian in a recorded video on her Instagram story. “The oldest cathedral in the world is in Armenia, and it’s where I baptized my kids. It’s in desperate need of restoration so this brand Metal Alchemist is making these bracelets with 100 percent of the [profits] going toward the restoration of the cathedral.”

Kardashian said Metal Alchemist sent her several pieces and that she’s been in conversations with the company’s “whole team.” “I’m so proud of them,” said Kardashian.

The Etchmiadzin cathedral, which dates back to 303 A.D., was constructed near Mount Ararat and is considered to be the birthplace of Christianity in Armenia. In 2001, the cathedral was designated as a UNESCO World Heritage Site and remains one of the most visited sites in the country.

“My faith is particularly important to me, and Armenians have relied on the Armenian Apostolic Church for centuries,” said Esrailian in a statement. “Giving back to the community has always been a priority for me, and I am so grateful to join my dear friends Carolyn and Cher in the effort to protect these holy sites.”

The initiative features bonded silver and “trialchemy” cuffs and rings that are engraved with Mount Ararat. The jewelry range in price starting at $58 and increasing to $498, and 20 percent of the profits will also go toward the restoration and preservation of Etchmiadzin and Khor Virap. Continued donations will be made thereafter in addition to Armenian nonprofit organizations, said Rafaelian.