Celebrity Dr. Oz Running for US Senate; Do We Need a Second Trump in Washington? 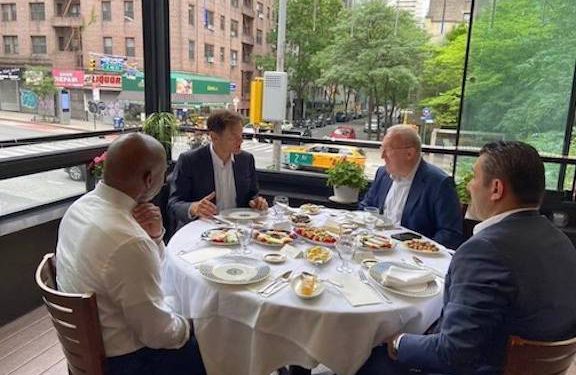 TV Celebrity Dr. Mehmet Oz announced on Nov. 30 his Republican candidacy for one of the two U.S. Senate seats from Pennsylvania.

Just like his idol Donald Trump, Dr. Oz has no background in politics. He has not even served as a City Councilman. The American public and the world-at-large suffered enough in the hands of the incompetent celebrity Trump who appointed Dr. Oz to the White House council on sport, fitness and nutrition, after appearing on “The Dr. Oz Show” as a presidential candidate.

Besides his lack of political experience, there are several other issues that should discourage or disqualify Dr. Oz from running for a Senate seat. Even though he is a medical doctor, he has offered plenty of baseless medical advice and promoted questionable treatments, such as diet pills and hydroxychloroquine, Trump’s fake cure for coronavirus, in order to enrich himself, jeopardizing the health of the American public. He shockingly suggested on FOX-TV that “a 2-3 percent increase in COVID-19 mortality from reopening schools nationwide might be a worthwhile trade-off.”

According to Wikipedia, Dr. Oz “has promoted pseudoscience and alternative medicine, and has been criticized by physicians, government officials, and publications, including the British Medical Journal, Popular Science, and The New Yorker, for endorsing unproven products and non-scientific advice. The British Medical Journal published a study in 2014 that found more than half of the recommendations on medical talk series, including “The Dr. Oz Show,” either had no evidence or contradicted medical research.”

Another problem is that Dr. Oz is running for the Senate from Pennsylvania, even though he is not a resident of that State. He lives in a mansion in New Jersey which violates the residency requirement to run for political office in that State. In late 2020, he changed his voter registration to a home owned by his mother-in-law in Pennsylvania. The only link he has with that State is that he graduated from the University of Pennsylvania over three decades ago in 1986.

Finally, without wanting to say anything disparaging about his Turkish background, it remains to be seen, if elected, Dr. Oz will act as the mouthpiece of the Turkish government or serves the interests of the United States. In the few days since announcing his candidacy, several articles have been written questioning his exclusive allegiance to the United States as a dual Turkish and American citizen. Even though Dr. Mehmet Oz was born in Ohio, he spent his childhood summers in Turkey and served for two years in the Turkish army.

Regarding his position on Armenian issues, there are two indications:

Nevertheless, it is up to Dr. Oz to clarify his position on the Armenian Genocide which is already recognized by both Houses of Congress and the President of the United States. Dr. Mehmet Oz’s true allegiances will be revealed if he shows any reluctance to criticize the grave human rights violations committed by his good friend, the President of Turkey, Recep Tayyip Erdogan.

Despite his celebrity status, Dr. Oz will face an uphill battle in his political campaign. He will be competing with a dozen other Republican candidates in the race for the Senate. If he overcomes that major hurdle, he would then go up against his Democratic rival. The current Republican Senator Pat Toomey has announced his retirement.

Dr. Oz has come under relentless attacks from the American media for his questionable past statements. Dr. Dale Summers wrote an article in The Daily Beast titled: “Please Don’t Elect Dr. Oz — He’s a Disgrace to Our Profession.” Summers stated: “I greet this prospect with the same enthusiasm I’d have for contracting dysentery…. He’s been promoting pseudoscience on his show for years.”

In another article, The Daily Beast’s Matt Wilstein reported the sarcastic comments made on TV by comedian Stephen Colbert about Dr. Oz’s political prospects. The article was titled: “Stephen Colbert Exposes Known ‘Liar’ Dr. Oz Ahead of Pennsylvania Senate Run.” Colbert ridiculed Dr. Oz’s statement that his candidacy will “help re-light the ‘divine spark’ inside every American.” He noted that Dr. Oz, before tossing his hat in the political ring, had a “lucrative career as a liar, peddling questionable health advice on TV.” Colbert then added: “But Dr. Oz may not just have fake medical claims; he may have fake Pennsylvania claims, because he’s running there despite living in New Jersey for years.”

Karen Tumulty, Deputy Editorial Page Editor and Columnist for the Washington Post, wrote an article headlined: “What Dr. Oz’s Senate campaign is missing.” Tumulty stated: “Oz has now offered himself as a prescription for what ails politics. Count me as skeptical that Pennsylvania voters will buy the idea that he is the cure they are looking for.”

It remains to seen whether Dr. Oz’s celebrity status will overcome his political inexperience and fake medical cures.