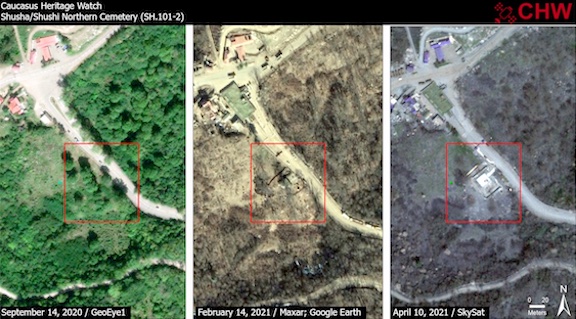 CHW made a “high confidence assessment” about the destruction of the cemetery in a Twitter post on Monday, adding that a portion of the grounds on the west side of a road leading into the city was leveled in the construction of a building complex.

The expansive cemetery, which spans both sides of the road, contained 96 tombstones dating from 1834 to 1920, that included the graves of noble Armenian families, known as meliks. The cemetery also housed two 12 to 13th century cross stones (khachkars).

The watchdog group said that although the construction occurred in an area shaded by tree cover, imagery from Feb 2021 (middle image above) reveals a dense array of tombstones, and documentation provided by the Yerevan-based Monument Watch, which has details of specific plots in the location.

CHW has made a high-confidence assessment that a centuries-old Armenian cemetery north of Shusha/Shushi has been partially destroyed. A portion of the grounds on the west side of a road leading into the city was leveled in the construction of a building complex. 1/4 pic.twitter.com/AbG8eV1V18

Neither the number of damaged tombs nor the affected plots can be determined with available data, CHW said, urging the President of Azerbaijan and UNESCO “to directly assess the extent of the damage and preserve this historic site.”

CHW is a team of researchers at Cornell and Purdue Universities. its mission is to monitor and document endangered and damaged cultural heritage using satellite imagery. The group also reported on the destruction of an Armenian cemetery in Hadrut http://asbarez.com/202286/destruction-of-more-armenian-monuments-in-hadrut-reported/ earlier this month, publishing similar satellite images from its research.

Saving Syunik: The Inception and Execution of KorniTun, Powered by All for Armenia, Miaseen