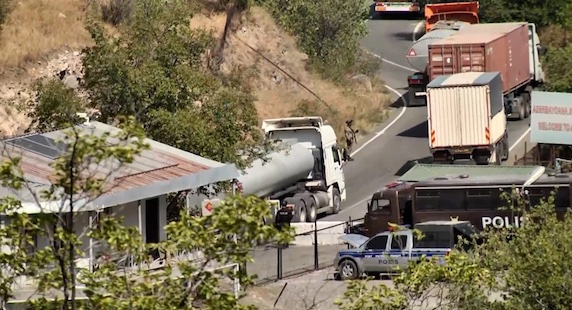 Traffic on the Goris-Kapan Highway in September

The border standoff in Armenia’s Syunik Province, especially the chaos at the Goris-Kapan highway, where Azerbaijanis have set up a check point and are impeding transportation has promoted the United States to reiterate and press for a “comprehensive settlement” of the Karabakh conflict.

“What we think is extremely important and what we are seeing happening in Syunik marz and particularly on the road between Goris and Kapan is the point that we have been making since the ceasefire arrangement that was announced last November, that is that there is a need for a comprehensive settlement, for Armenia and Azerbaijan to really be able to see a long term peace,” the U.S. Ambassador to Armenia Lynne Tracy told reporters on Wednesday, Ambassador said.

For weeks, Azerbaijani forces have created chaos on the Goris-Kapan Highway, a major civilian and commercial route and Armenia’s only road to Iran. Late last month, Azerbaijani forces blockaded the road and after setting up a check point last week, they began inspecting vehicles from Iran and levying taxes. On Wednesday, Azerbaijani forces arrested two Iranian truck drives, whom they claimed had illegally crossed into Azerbaijani territory.

In speaking to reporters, Tracy, again stated that the U.S. does not see the status of Nagorno Karabakh as having been resolved. Similar statements by Tracy angered Azerbaijan, with officially Baku accusing Tracy of undermining the OSCE Minsk Group process, long dismissed as ineffective by Azerbaijani President Ilham Aliyev.

“We don’t see the status of Nagorno Karabakh as having been resolved,” Tracy reiterated on Wednesday. “We see the need for a comprehensive settlement that requires negotiations, and that is one very important way to try to address the various tensions that we have been seeing particularly in the border areas.”

Tracy spoke to reporters on the margins of a conference where the U.S. announced $9.5 million in assistance to Armenia to combat corruption and strengthen public demand for accountability.

Tracy attended the conference, along with Armenia’s Deputy Justice Minister Suren Grigoryan, Chair of the Commission for the Prevention of Corruption Haykuhi Harutyunyan, lawmakers and civic leaders.

'It Was Torturous': Armenian POWs Testify to Torture in Azerbaijani Captivity