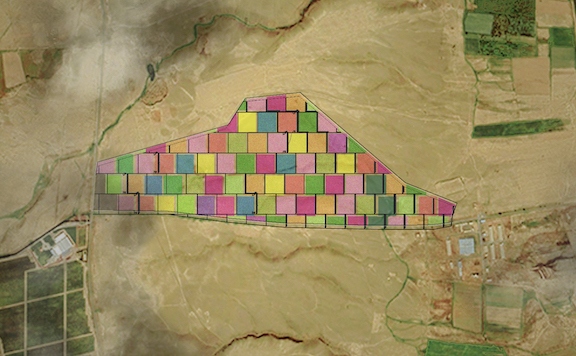 YEREVAN—Children of Armenia Fund announced last year it will be building its second state-of-the-art SMART Campus in rural Armenia. The new structure will be located in the Armavir region, providing children and families with cutting-edge education programs.

An international architectural competition was launched in March of this year, offering visionaries worldwide a unique opportunity to submit design concepts for the Campus being constructed in Armavir.

A panel of international experts led by award-winning architect Michel Mossessian gathered in Lori, Armenia, where COAF’s first SMART Center opened in 2018. Over the course of three days in early May, the jurists reviewed over 70 submissions.

“We had an intensive three days, reviewing 74 entries at the existing COAF SMART Campus in Lori,” said Mossessian before announcing the finalists. “We were very impressed by the quantity and quality of the submissions.”

1. "Azure" by Electric Architects from Armenia

“Their conceptual visions met specific selection criteria in terms of reflecting the cultural identity of the region, creating a sense of community, and working with nature,” concluded Mossessian.

SMART Centers are innovative non-formal education hubs that provide rural youth with holistic programs aimed at ensuring they reach their full potential and become catalysts of change in their communities. Children and teenagers ages 3 to 18+ are offered a variety of after-school programs, enhancing their physical, emotional, and cognitive development.

The SMART Center in Lori has welcomed over 5,000 beneficiaries from 28 communities who have studied a broad range of disciplines, including foreign languages, entrepreneurship, music, arts, engineering, and athletics.

COAF’s second SMART Campus in Armavir will pave the path for future SMART Campuses to be built across all of Armenia’s rural regions. The establishment of SMART Campuses and the natural ecosystems they foster will revitalize hundreds of additional rural communities and advance the lives of thousands of beneficiaries.

Based on the jury evaluation of early design concepts, COAF will soon choose the design solution most suitable to meet the demands of the local communities in Armavir and, more specifically, their children.

The Children of Armenia Fund is a non-profit, non-governmental organization that employs community-led approaches aimed at improving the quality of life in rural Armenia, with a particular focus on children and youth. COAF’s target development areas are education, healthcare, social and economic development. COAF launched its programs in 2004, starting in one village and expanding to 64 villages in Armavir, Aragatsotn, Lori, Gegharkunik, Shirak, and Tavush regions, impacting more than 107,000 beneficiaries. Since 2015, COAF has developed and started implementing the SMART Initiative. COAF SMART is designed to advance a generation across the rural world through education that will benefit individuals, societies, and the environment. As an exemplary model of development, COAF SMART will be replicated in other regions and communities throughout Armenia. The first COAF SMART Center was inaugurated on May 27, 2018, near the village of Debet, Lori Region