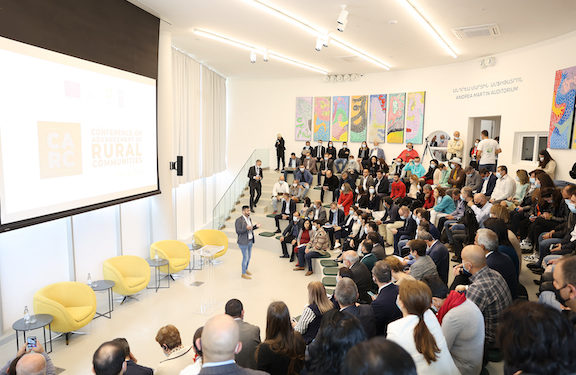 YEREVAN—Over 170 key private and public actors attended the second Annual Conference on Advancement of Rural Communities on October 2. The conference took place at the COAF SMART Center in Debet, Lori, and was initiated by the Children of Armenia Fund, in partnership with the Ministry of Territorial Administration and Infrastructure of Armenia and the United Nations Development Program In Armenia, with the financial support of the Delegation of the European Union to Armenia. Headlining speakers and panelists discussed smart governance, green agriculture, sustainable employment, and social recovery in the context of rural growth and development.

Like the previous CARC, held in 2019, this year’s conference aimed to attract external attention and contributions for Armenia’s rural regions, as well as establish fertile ground for collaboration between various key stakeholders. Among the attendees were representatives of local and international organizations, state and local government bodies, and individual entrepreneurs.

Following the opening remarks, panel moderators kicked off a cycle of discussions which addressed rural challenges and offered new approaches for sustainable, forward-looking recovery. Conference attendees were also provided the unique opportunity to visit an outdoor expo, where private entrepreneurs and organizations from all regions of Armenia and Artsakh presented their services, innovations, and products.

The conference ended with a touch of traditional culture and artistry, with the ArtaSax Saxophone Quartet performing pieces from world-renowned Armenian and international composers.

The Children of Armenia Fund is a non-profit, non-governmental organization which employs community-led approaches to improve the quality of life in rural Armenia, with a particular focus on children and youth. COAF’s core development areas are education, healthcare, social services, and economic development. COAF launched its programs in 2004, starting in one village and expanding to 64 villages in the Armavir, Aragatsotn, Lori, Gegharkunik, Shirak, and Tavush regions, impacting more than 107,000 beneficiaries.

Since 2015, COAF has developed and implemented its signature SMART Initiative. COAF SMART is designed to advance generations of rural Armenians through cutting-edge education, focused both on innovation and capacity-building. The first COAF SMART Center was inaugurated on May 27, 2018, near the village of Debet, in the Lori Region, and will be replicated in communities throughout Armenia.

UNDP is the leading organization of the United Nations that fights to end poverty, inequality, and climate change. Working with our extensive network of experts and partners in 170 countries, we help states create unified, lasting solutions for people and the planet Earth.

The UNDP Armenia Office was established in 1993 and supports the Government in implementing its development priorities and Sustainable Development Goals.