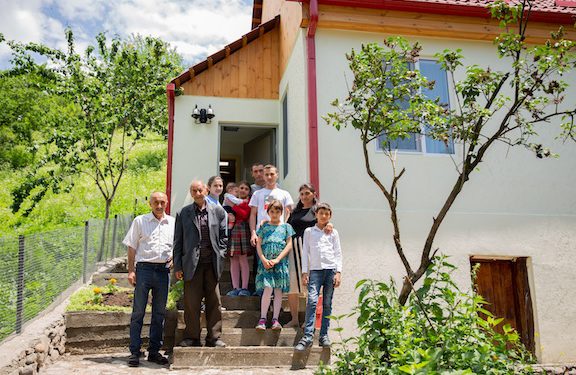 YEREVAN—The Children of Armenia Fund has secured permanent housing for 13 families from Artsakh who were displaced because of the attack on Artsakh last year. Two of these families, the Margaryans and Chirkinyans, moved into their new homes located in the villages of Debet and Dsegh (Lori region of Armenia) on June 11. The implementation of the initial phase of the project meets the housing needs of over 100 people from Artsakh.

COAF’s “Moving Mountains” fundraiser held last December was partially devoted to building houses for displaced families in the immediate aftermath of the conflict. The organization aims at building and renovating a total of 10,000 square feet of housing area at the cost of $430 per square foot, adding up to 13 homes with an average living space of 750 square feet. The homes are fully furnished with running water, heating, electricity, internet and appliances such as refrigerators, washing machines, vacuum cleaners, televisions, and kitchenware.

“COAF’s response to the crisis has been swift in terms of mobilizing resources and providing displaced compatriots from Artsakh with shelter and humanitarian aid,” stated Korioun Khatchadourian, Managing Director of COAF. The organization’s founder Garo Armen has also stressed the urgency of providing housing in Armenia proper so that the tragedy of a community of Armenians living in trailers (domiks) for decades like they have since the 1988 earthquake is avoided.

In addition to providing housing, COAF is actively taking steps to ensure displaced families from Artsakh are smoothly integrating into their newfound communities. Access to COAF’s education, healthcare, social and economic programs has been a major component of the services being provided to youth and adults alike.

“A variety of criteria were assessed and brought into our final choice of families to receive housing. But providing homes to those who had intentions to leave Armenia and Artsakh played a decisive role in our decision-making process because it allowed us to keep them in the country,” says Project Manager Ovsanna Yeghoyan.