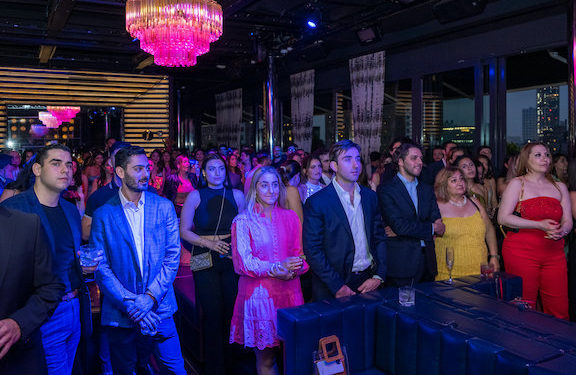 A scene from the 12th Annual COAF Summer Soiree

NEW YORK—The 12th Annual COAF Summer Soirée, held on June 21st in New York City, raised $125,000 for the establishment of a Child & Family Center in Stepanakert, Artsakh, an initiative dedicated to rebuilding and transforming the post-war population of the capital where many have found refuge from regions of Artsakh under Azeri control.

The event’s contributions will build upon the $150K generously donated earlier this year by benefactors Victor Zarougian and Judith Saryan of Cambridge, MA. The Child & Family Center will aim to confront barriers to mental and social care in Artsakh, where, notably, early childhood development and social support are generally lacking.

COAF has always emphasized the importance of providing psychosocial support as well as early childhood education as a critical component of its rural development efforts. Over the past 16 years, COAF’s Child & Family Services have offered psychological, social, and speech therapy services and child development programs to over 6,500 children in more than 20 overlooked rural communities across Armenia.

Since the opening of its inaugural Child & Family Center in the village of Hatsik (Armavir Province) in 2021, COAF has been providing access to life-changing resources needed to meet the needs of rural populations, thereby improving the quality of their lives. The Hatsik Center has so far served more than 150 individuals in Hatsik and surrounding communities. COAF’s expansion into Artsakh will allow children and families suffering from displacement, PTSD, and other war-related afflictions to receive the support necessary to build better, more sustainable futures.

“By promoting children’s mental and educational development, COAF aims to have a lasting, positive impact on the personal growth and academic trajectory of an entire generation of Armenians,” said COAF Managing Director, Korioun Khatchadourian. “Thanks to generous participation at this year’s Soirée, we will be able to replicate the success achieved in Armavir, leveraging our resources and expertise to confront the developmental challenges of 250+ children and adults in Artsakh.”

The Soirée also marked COAF’s return to in-person events, following a pandemic hiatus, and successfully brought together over 225 guests from across the United States. Notably, the fundraiser received support from U.S,-based Armenian businesses and influencers, including Tacori jewelry and the clothing brand WearArmenia, both of whom offered merchandise for sale or for raffle, with all profits donated to COAF.

Guests were also able to enjoy a tasting of the fruits of Armenia’s viticulture movement, provided by Storica Wines. The event was centered by an inspiring speech, given by 20-year-old COAF Alumna, Milena Antonyan, who traveled from the rural village of Arteni to share her story of ambition and success with a New York audience. Milena grew up with COAF from the age of seven and took part in various programs including English language classes and debate clubs offered by COAF at her local school. She went on to receive a Jack and Zarig Youredjian Scholarship and recently graduated from law school in Yerevan.

Another Threat of War from Aliyev