Commemorating the Genocide Under Lockdown 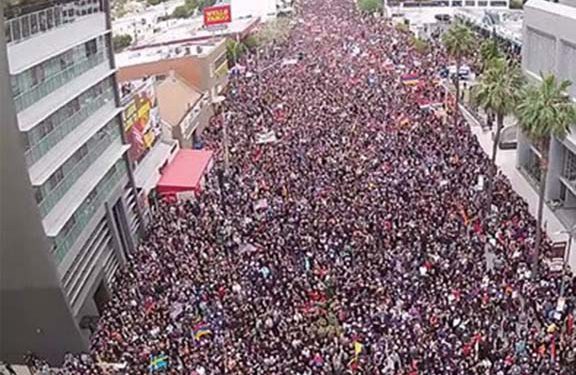 Over the years it has been such a privilege for me to be able to travel and explore Armenian communities around the world. The experience has given me a deeper appreciation of how we Armenians have kept our language and the traditions alive.

During my travels, wherever I meet Armenians, the sage words of our beloved poet, William Saroyan rings true. He says, “…For when two of them meet anywhere in the world, see if they will not create a new Armenia.”

Yes, since the Genocide happened, we’ve come together and have built thousands of small “Armenias.” Here in the Los Angeles metropolitan area, we have the largest population of Armenians outside of our motherland and we truly have created a new Armenia.

Today April 24, because of the Coronavirus lockdown, I alongside of thousands of Armenians are home and we are going to mark the 105th year of the genocide in a different kind of way than before. This year there won’t be any public gatherings, no public vigils and no marches. This year is more about inner reflections.

This takes my mind to five years ago on April of 24, on the commemoration of the 100th anniversary of the Genocide. On that day, I had the great opportunity to walk along side of 160,000 people in the streets of Los Angeles, to demand justice. That was a very unique demonstration. It created an intense feeling and I’m glad I could participate on that march and have had an immense satisfaction. The timing of that huge commemoration was so perfect—there was no Coronavirus, and the weather was so accommodating, with a comfortable overcast. Nothing like today with the temperature hovering in the 90s

This year at home, I watched the slew of programs streaming on numerous Armenian TV channels in LA area, dedicated to the Genocide. By all accounts, two TV programs stood up for me. One was the movie “Mayrig” made by French-American filmmaker Henry Verneuil in 1991. I never had the chance to watch that movie, which is a semi-autobiographical film written and directed by Verneuil himself. The film’s principal cast includes Omar Sharif and Claudia Cardinale. The movie is about the struggle of an Armenian family that emigrated to France from Turkey after the Armenian Genocide of 1915.

The other one was a documentary by Michael Hagopian, a survivor of the Armenian Genocide, who came to the United Sates from Turkey after World War I. He studied filmmaking and has made series of documentaries based on interviews of the genocide survivors.
I also listened to many concerts and heard the recorded messages of our representatives for the commemoration of the Genocide.

A meaningful program this year, as an alternative commemorative event, was to serve 1.5 million meals to needy people. However the committee which was undertaking the project could raise enough funds to feed 3 million meals.

The coronavirus lock down has created a unique opportunity for me to teach my grandchildren to speak Armenian. Each day, after they’ve done their school work, I have the chance to study with them on line, for about a half an hour. Today I had planned to tell them little stories about what had happened to our forefathers in Turkey. They already knew a little bit of our past history.

I told them the story of how the American government, during the days of the Genocide, starting in 1915, had created a charity organization, called Near East Relief, which was able to save many Armenians from their dooms. And how the organization made many orphanages in Turkey, Syria and Lebanon to save the lives of thousands of Armenian children. It seemed my grandkids were pretty interested to hear that story and it resonated with them.

Then I told them another personal story, that it had happened to an American friend of mine, Katherine Yamada, who is sort of a historian for our city of Glendale. One day when she was visiting Portland, Oregon, at an Antique shop, a tiny glass bottle, filled with rice, catches her attention. She picks up and reads the label which said, “…the daily ration of rice for a child is less than 7/8 per ounce…” She buys the bottle not knowing that it was a promotional item for the Near East Relief to raise funds for the Armenian orphans. Today that bottle has traveled from Oregon to Yerevan and has found its home on the shelves of the Genocide museum—the Dzidzernagapert.

With sharing these stories, I thought I was able to accomplish a tiny part of my obligations to pass a small slice of our history to my grandkids.

Armenian Educational Foundation Steps Up in Time of Crisis