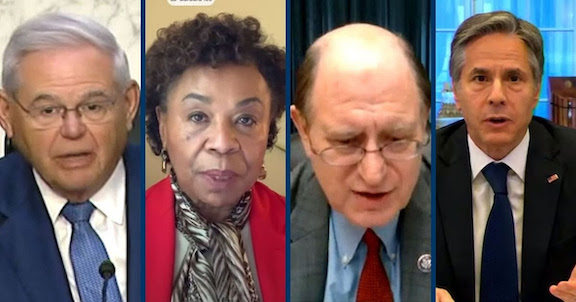 “We join with our congressional allies in demanding an immediate stop to any and all US military aid to Azerbaijan,” said ANCA Executive Director Aram Hamparian. “Not a single US taxpayer dollar should be shipped over to the oil-rich, racist, and violent Aliyev regime. Period. End of sentence,” concluded Hamparian.

During Senate Foreign Relations Committee questioning, Chairman Menendez explained, “I was disappointed that the Administration green-lighted the [Section] 907 waiver renewal despite Azerbaijan’s attack on Nagorno Karabakh. Now, after the 907 waiver, interfering with the actual territorial sovereignty of Armenia in the border issue, not releasing the actual prisoners of the conflict in violation of international law – I mean, I think that they [Azerbaijan] can act with impunity and I think when we waived it [Section 907], we gave them that green-light.”

Secretary Blinken stammered through a clearly strained response, stating “We have to continue to take a look at this.  I have been working actively on this particularly, getting the return of the prisoners, getting engaged in an actual process discussion negotiation over an actual resolution and working on those things, and it was my hope that we would get a little bit of traction. But I think we have to continue to look at this and re-look at this in the future,” continued Secretary Blinken.

During the House Foreign Affairs Committee hearing, senior committee member Rep. Brad Sherman (D-CA), told Secretary Blinken, “the Administration has issued a Section 907 waiver to allow the sale of weapons to Azerbaijan and I hope that you would reconsider that in light of Azerbaijan’s violations of territorial integrity not of Nagorno Karabakh, although that is important, but of Armenia, itself, in unprovoked aggression.”

During the House Appropriations Subcommittee on Foreign Operations hearing, Chairwoman Barbara Lee (D-CA) noted that she would be submitting a question regarding Nagorno Karabakh and the waiver of Section 907 restrictions on aid to Azerbaijan and requested a written response from Secretary Blinken.

On Turkey, Senator Menendez argued, “There are more journalists and lawyers arrested in Turkey today and in jails.  Turkey is constantly violating, in my perspective, international law when it threatens Cyprus and its exclusive economic zone, when it declares an economic zone going to Libya that is not recognized at all but interferes with Greece’s economic zone, when it engages in aggression against Armenia through Azerbaijan, when it’s playing a nefarious role in Libya.  So, what are we doing to counter Turkey under Erdogan? And, I say Turkey under Erdogan because it’s not about the Turkish people, but it’s certainly about its leader.”