Council of Europe Chief Urges Yerevan and Baku to Negotiate 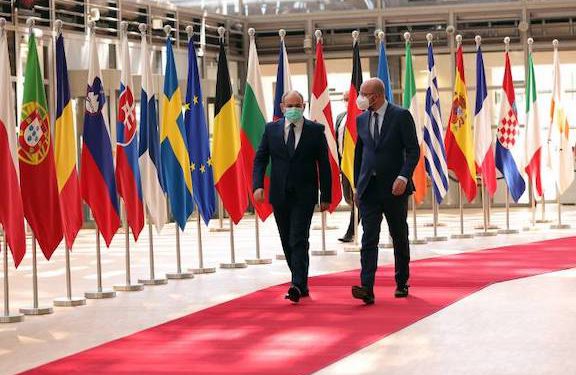 The President of the Council of Europe Charles Michel said that during his meeting with Armenia’s Acting Prime Minister Nikol Pashinyan and in a call with Azerbaijani President Ilham Aliyev he urged the two countries to resume negotiations over the border standoff, saying stability in the South Caucasus was important for the European Union.

“The EU is ready to provide expertise on border delimitation and demarcation and to support confidence building,” said Michel. “The European Union also encourages both parties to cooperate, as matter of urgency, on the return of detainees and full transparency with regard to mine fields, and other important humanitarian issues.”

Michel recalled the EU’s almost 20-million-euro humanitarian assistance, explaining that addressing these immediate challenges is only a “first step” toward a sustainable and peaceful settlement of the conflict.

He said he call on both sides to engage in renewed negotiations “in a constructive spirit.”

“The European Union has a profound interest in the security, stability and prosperity of the South Caucasus region as an integral part of the EU’s Eastern Partnership,” Michel said.

Pashinyan briefed Michel about the situation in the South Caucasus after last fall’s war when the two met in Brussels on Wednesday.

Armenia’s prime minister also briefed Michel about the current situation on the Armenian-Azerbaijani border, stressing the need for the immediate withdrawal of Azerbaijani troop from Armenia’s sovereign territory.

According to Pashinyan’s press office, he emphasized the need for a proper response by the international community to Azerbaijan’s provocations and need to take action action to ensure the return of the Armenian prisoners of war. He also welcomed the European Parliament resolution urging Azerbaijan to immediately and unconditionally release all Armenian POWs.

Michel is said to have welcomed Armenia’s position to solve the border standoff peacefully and through diplomatic efforts and has expressed the EU’s readiness to support this process.

Journey to Restore a Historic Armenian Map During the Pandemic