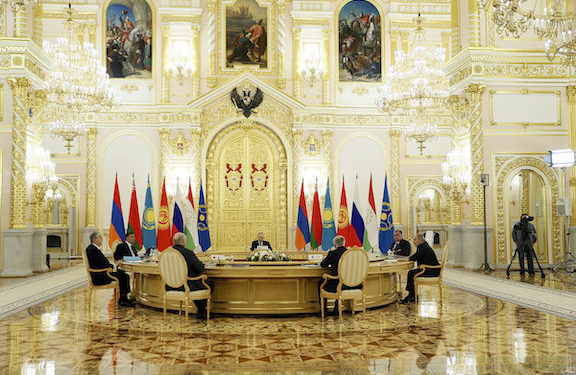 Prime Minister Nikol Pashinyan on Monday told a gathering of leaders of the Collective Security Treaty Organization, known as the CSTO, that Yerevan remains unhappy with the organization’s response last year when he appealed to the group for assistance when Armenia was attacked by Azerbaijan.

Last May, Azerbaijani forces breached Armenia’s sovereign border and advanced their position onto Armenia’s Gegharkunik and Syuink provinces, where they remain until today. Pashinyan appealed to the CSTO, only to receive a rejection in July. Whereas, as the leader of the presiding country, Pashinyan approved and encouraged the deployment of CSTO forces to Kazakhstan, where internal unrest threatened to topple that country’s government.

“As you know, around the same time last year, Azerbaijani forces infiltrated Armenia’s sovereign territory. Armenia applied to the CSTO to implement the mechanisms envisioned by the Crisis situations response procedures approved on December 10, 2010. Unfortunately, we cannot say that the organization reacted in a way the Republic of Armenia expected,” Pashinyan told his CSTO colleagues.

“For a long time we have been raising the issue of arms sale by CSTO member states to a non-friendly country. Those weapons were used against Armenia and the Armenian people. This is a problem as well,” added Pashinyan.

“Frankly, the response of the CSTO member states during the 44-day war in 2020 and after that didn’t make Armenia and the Armenian people very happy, but I want to highlight the important role of the Russian Federation and President of Russia Vladimir Putin in the stop of the war in Nagorno Karabakh,” said Pashinyan, who reiterated Yerevan’s commitment to fulfilling it obligations envisioned in the post-war statements.

“I think that drawing conclusions is really important and good, but Armenia, as a founding member of the organization, is committed to the organization’s further development and views the organization as a key factor on ensuring stability and security for the Eurasian region and Armenia,” added Pashinyan.

The leaders of the CSTO adopted a joint statement after the summit in Moscow, addressing the need to ensure the security of borders in the organization’s area of responsibility.

The statement said that the CSTO is ready to ensure the security of its borders, including on the backdrop on the concerning situation in Afghanistan and other foreign borders of the organization’s members.

“The situation in Afghanistan and on other foreign borders of CSTO member states is concerning. In this context we express readiness to ensure the security of borders in the CSTO area of responsibility,” reads the statement.

The statement also mentions that the CSTO member states are ready to establish practical cooperation with NATO.

“Realizing our responsibility in ensuring sustainable peace in the Eurasian region, we emphasize the need for de-escalation in the continent and we affirm readiness to establish practical cooperation with NATO,” the statement says.