CSTO Did Not Take Definitive Action to Assist Armenia 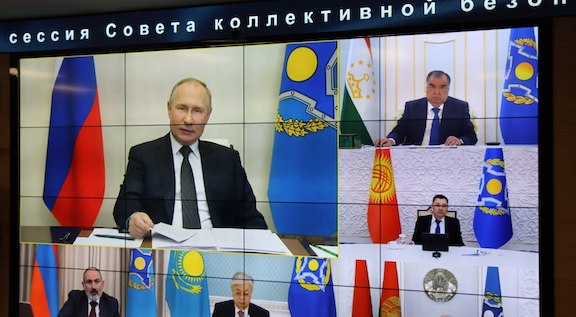 A virtual meeting of CSTO leaders was held on Oct. 28

YEREVAN (Azatutyun.am)—The Russian-led Collective Security Treaty Organization did not announce military aid or voice support for Armenia on Friday after a virtual summit of its member states that discussed recent fighting on the Armenian-Azerbaijani border.

CSTO member Armenia initiated the summit in another attempt to secure such support in the face of what it regards as Azerbaijani military aggression. Prime Minister Nikol Pashinyan again urged the military alliance to condemn Azerbaijan and come up with a “roadmap for restoring Armenia’s territorial integrity.”

According to Pashinyan’s press office, a report presented by CSTO Secretary General Stanislav Zas confirms that Azerbaijani forces invaded Armenian territory and stresses the need for their withdrawal.

However, a CSTO statement on the summit said that the presidents of Russia and the other member states only “expressed a firm conviction that the existing disagreements and contentious issues should be settled by political and diplomatic means.”

They discussed “joint measures provide assistance to the Republic of Armenia” and made “a number of proposals to further work on relevant drafts decisions,” the statement said, indicating a continuing lack of consensus within the bloc.

There was no word on the dispatch of CSTO monitors to Armenian border areas affected by the September 13-14 hostilities. Russia’s Foreign Minister Sergei Lavrov said on October 12 that the CSTO secretariat in Moscow proposed such a monitoring mission and is waiting for Yerevan to secure the other member states’ approval of it.

Lavrov spoke in response to growing Armenian criticism of the CSTO’s reluctance to side with Armenia in the border conflict.

Armenia appealed to Russia and the CSTO for military aid on September 13 hours after Azerbaijani forces attacked many of its positions along the border. Its allies effectively declined the request, deciding instead to send to two fact-finding teams tasked with studying the situation on the ground. The report presented by Zas during the summit is based on the findings of those teams.

In his speech at the CSTO partly publicized by the Kremlin, Russian President Vladimir Putin said that Russia has for centuries been “supporting our Armenian friends in ensuring the security of the Armenian people.”

Putin went on to say that both Armenia and Azerbaijan are “states close to Russia” and that Moscow is doing its best to normalize their relations. Their strict compliance with Russian-brokered agreements is “the only possible and realistic path to peace,” he stressed.