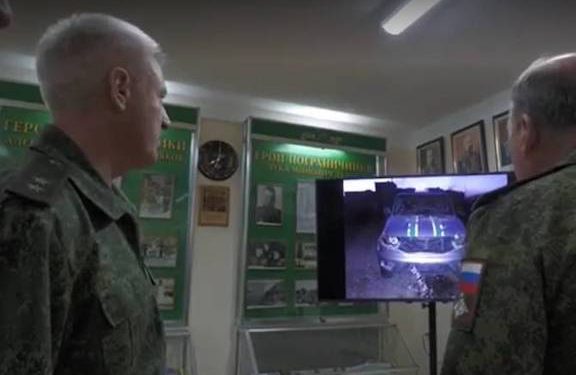 The Head of the Russian Border Guard Service in Armenia, Lt. General Roman Golubitsky, showed images of Azerbaijani shelling that targeted its checkpoint stationed in Armenia’s east to the CSTO Chief of staff Anatoly Sidorov who is in Armenia on a fact-finding mission, Sputnik Armenia reported.

“The 15-man Sotk border checkpoint was deployed in a two-story building. After the shelling began people took shelter in the corridor of the first floor. No one was wounded. In fact, during the fire the crew was able to exit the position, but they were unable to evacuate all the equipment,” Golubitsky said.

“The situation in the responsibility zone of the Russian Border Guard Department in Armenia is stable but tense. As of today, of course, the calmest sections are the Armenian-Turkish and the Armenian-Iranian borders,” Golubitsky said, according to a post on the CSTO’s Telegram account.

The border commander said that his units were attempting ensure security in all directions in cooperation with the Armenian Armed Forces and local authorities.

In meeting with Russia’s Ambassador to Armenia Sergei Kopyrkin on Friday, Sidorov, the CSTO chief of staff, said the organization could not refuse to visit Armenia, presumably referring to Yerevan’s appeal to the organization, following this week’s attack by Azerbaijan.

“In Yerevan, special importance is given to the CSTO mission and there is hope that the CSTO will play an important role in stabilizing the situation and taking measures for preventing escalation,” the Russian ambassador told the CSTO leader.