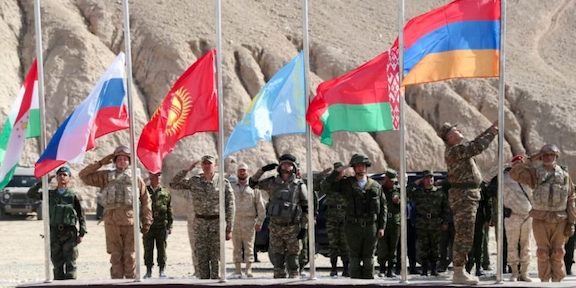 The administrative body of the Collective Security Treaty Organization on Wednesday said that it “understands” Armenia’s stated reasons for not wanting to hold the group’s annual military drills in Armenia.

Prime Minister Nikol Pashinyan on Tuesday said that it would be “inexpedient” for Armenia to host the upcoming drills given the situation in the country, presumably referencing the crisis created by Azerbaijan’s month-long blockade of Artsakh.

During a press conference, Pashinyan continued to lament that the CSTO was unable to provide a succinct assessment of the situation in Armenia, a member-state, and did not properly characterize Azerbaijan’s invasion of Armenia in September.

“The necessity of holding these exercises this year on Armenia’s territory was approved earlier in Yerevan. At this time the CSTO Secretariat has not received notification from the Armenian side through defined procedures on cancelling these exercises,” the CSTO Secretariat said. “We are treating the situation that does not allow to fully implement planned CSTO military exercises in the Republic of Armenia with understanding.”

The CSTO body added that together with the organization’s joint staff it is taking all steps to fully implement combat readiness plans of the joint forces approved by the organization’s statutory bodies for increasing the readiness to the benefit of ensuring security of member states.

Meanwhile, the CSTO’s new Secretary-General Imangali Tasmangambetov said the organization is capable of solving its objectives.

“Despite all challenges, I am deeply convinced that there is no alternative to the CSTO. It is capable of solving the tasks set before it,” Tasmangambetov, who assumed office on January 1, told the Tass news agency through his spokesperson Vladimir Zaynetdinov on Tuesday.

He noted that the world is currently witnessing major geopolitical challenges.

“We will resolve very complicated political, economic and other issues. The CSTO is facing no less difficult issues. All these challenges and issues are impacting the key role of our organization, its reputation and ability to be an effective mechanism for ensuring regional security. Its future reputation and effectiveness depends on us and you,” he said.