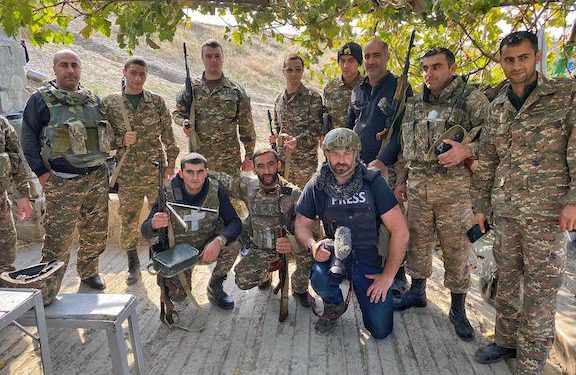 HOLLYWOOD–Cultural Impact Foundation announced its partnership and support of 45 Days: The Fight For A Nation, a new feature documentary directed by Emile Ghessen and produced by Asko Akopyan.

The movie is about the unprovoked Azerbaijani and Turkish assault on the Autonomous Republic of Artsakh in September of 2020. It shows how the news media used misinformation or avoided coverage of these events and thereby affected the public’s awareness and perception of this invasion and war.

Ghessen, a former Royal British commando, traveled to the region and told the story of the people who took up arms to fight, documenting the pain and suffering of those involved in the war.

45 Days: The Fight For A Nation is Ghessen’s third feature war documentary. His other projects showcase volunteers who traveled to Iraq and Syria to fight against Islamic State and others who fought to defend Ukraine in their war with Russian.   Akopyan is also the producer of Songs of Solomon, Armenia’s official selection for the 93rd Academy Awards for Best International Feature Film.

The first private screening and red-carpet reception for the film in the United States was held at the TCL Chinese Theatre in Hollywood, California on September 16, to a capacity audience.

The evening kicked off with a reception in the courtyard to music by violinist Ashot Dumanyan.  On stage, both Ghessen and Akopyan shared their emotional journey and thanked the thousands of supporters who collectively made it possible for the story of the people of Artsakh to come to life on the screen.

They stated that although the film reveals many painful stories and tragic images of the war and its aftermath, it does end on a hopeful note with a call to action.  Armenia’s Consul General to Los Angeles Ambassador Armen Baibourtian presented the director and the producer with The Coat Of Honor pin of the Republic of Armenia and thanked them for sharing the story of Artsakh with the world.

Singer Andre Hovnanyan led the crowd in a moment of silence and sang Der Voghormya (Lord Have Mercy) by Komitas.  There followed emotional performances by Arthur Khachents, the young soldier and musician from Hadrut who gained worldwide fame among Armenians during the 44-day war through his social media posts from the front with his fellow soldiers.  Khachents, who is credited for the movie soundtrack, was accompanied by cellist Ismael Guerrero.

Following its Hollywood screening, the film tours with private screenings across the US, Canada and Europe, starting with Fresno, San Francisco, Las Vegas, Chicago, Boston, New York and Washington.  For information and tickets, log onto 45daysfilm.net/tickets.

Cultural Impact Foundation is a nonprofit 501(c)(3) organization with a mission to commission and support unique cultural projects that can improve our understanding of historical events by revealing acts of human kindness and heroism in the face of adversity.  The first documentary commissioned by CIF was Bloodless: The Path to Democracy by multi-award-winning documentary filmmaker Bared Maronian.
Bloodless garnered several prestigious awards in 2020 including the Beverly Hills Film Festival’s highest honor: the Golden Palm Award and its Best Feature Documentary Award, The Vitruvian Award at the DaVinci Film Festival, and the Audience Award at the Lunenburg Film Festival, where the film was chosen as the festival’s opening night film.