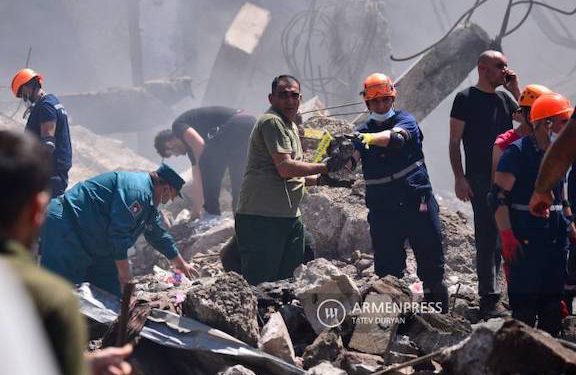 Rescue workers are searching the rubble for possible survivors

Emergency workers on Monday continued to extinguish the fire and search the rubble after an explosion rocked the Surmalu shopping center in Yerevan on Sunday, killing 10 and injuring 61 people, officials said, adding that 21 people remained unaccounted for.

Armenia’s Emergency Situations Ministry said that a Russian citizen and six Iranian nationals were among the missing. Later on Monday Hayk Kostanyan, a spokesperson for the Emergency Situations Ministry, said that five of the Iranians were safely in Georgia, according to information he received from the Iranian Embassy in Yereva, Sputnik Armenia reported.

“Search and rescue and firefighting operations are ongoing, our teams and volunteers are working together with the representatives of the Armenian Red Cross,” Kostanyan said Monday.

At around 1:30 p.m. local time on Sunday, a massive explosion rocked the Surmalu Shopping Center in Yerevan. Firefighters and emergency crews worked well into the night. It was later announced that the explosion occurred at a fireworks depot within the building.

As is the case with such situations, it is a race against time. The likelihood of finding survivors diminishes as more time passes.

“It is clear that the more time passes the more chances of finding anyone alive is diminishing. The rescue operations have not stopped. We have taken into account the risks, safety precautions, we must eliminate he risks to be able to work,” Bagrat Vadazaryan, the deputy chief of rescue forces told reporters on Monday.

“There is a risk of structural collapse, there are steel-concrete structures hanging, we must remove them and then carry out the search. Besides, using a tractor in this rubble could harm possible survivors under the rubble,” Vardazaryan added.

There are 150 firefighter-rescuers deployed, with an additional 102 volunteers from the Armenian Red Cross Society and 15 volunteers from VOMA – a survival-training organization.

Prime Minister Nikol Pashinyan visited the site of the explosion on Monday morning, and was briefed about the rescue operation underway, his office said in a statement.

The Emergency Situations Ministry said Monday that it was “99 percent certain” that the explosion at the Surmalu market was not an act of terrorism, a ministry spokesperson Armen Pambukhchyan told reporters.

“By looking at the footage of the moment the blast it occurred, it become obvious that there can be no talk about an act of terror because first of all there is some fire, smoke rises, then only the blast. Meaning there was a large fire which then spread to the area where explosives [fireworks] were stored. According to the ministry of emergency situations this is 99 percent accurate,” Pabukhchyan added.

Hours after the explosion, bomb threats were sent to the Yerevan metro, the malls operating in the city and other venues. Armenia authorities immediately evacuated those areas , bit later determined that it was hoax.

Armenia’s National Security Service urged the media and residents to not spread unsubstantiated rumors about a terror attack, as it complicates rescue efforts and spreads unnecessary panic among the population.