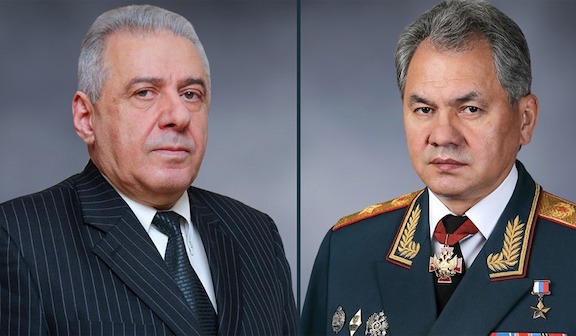 Vagharshak Harutiunyan and Sergei Shoigu again spoke by phone on Wednesday amid a continuing Armenian-Azerbaijani military standoff at disputed portions of the border.

The standoff began after Azerbaijani troops advanced several kilometers into Armenia’s Gegharkunik and Syunik provinces on May 12-14, triggering an Armenian military buildup there.

In a statement on the phone call, the Armenian Defense Ministry said the two ministers looked at “ways of resolving the existing situation at the Armenian-Azerbaijani border.”

“Vagharshak Harutiunyan and Sergei Shoigu also discussed the deployment alongside the Armenian Armed Forces of Russian border guards at border sections of Syunik and Gegharkunik,” added the statement. It gave no other details.

The Russian Defense Ministry issued no statements on Shoigu’s latest phone call with his Armenian counterpart.

Pashinyan proposed on May 27 that Armenia and Azerbaijan withdraw their troops from the contested border sections and let Russia and/or the United States and France, the two other countries co-chairing the OSCE Minsk Group, deploy observers there. Baku effectively turned down the proposal.

Syunik borders districts southwest of Karabakh which were retaken by Azerbaijan during and after the six-week war.