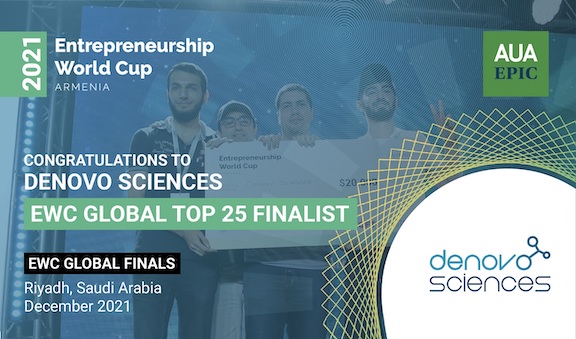 Denovo Sciences will participate in the EWC Global Finals in December

The EWC is one of the world’s largest and most diverse pitch competitions and support programs for the next generation of entrepreneurs. Since launching in 2019, EWC has supported more than 300,000 participants from 200 countries, awarded $2 million in cash prizes, and provided in-kind support and services valued at $150 million.

In the 2021 competition, EWC received 100,000 registrations from 200 countries. One thousand startups pitched at the National Finals organized and judged by local entrepreneurship organizations spread across six continents. The top 100 startups advanced to the virtual component of the Global Finals, and the top 25 will travel to Riyadh, Saudi Arabia, for the final stage of the competition.

Armenia’s National Winner, Denovo Sciences, is among the Top 25 EWC Global Finalists. It will compete with startups from 20 other countries, some of which have very mature ecosystems, such as the United States, Canada, the United Kingdom, Singapore, China, and India.

The Armenian National Finals was held on July 24, in Yerevan, and two Armenian startups, Denovo Sciences, and Zoomerang advanced to the global competition as national representatives.

“It is the first time that Armenia is participating in this global competition. We were elated that two startups from Armenia advanced to the Top 100 Global Finalists. To then have one of the two, Denovo Sciences, our National Winner, to advance further in the competition to be among the Top 25 Global Finalists is beyond all expectations. It is a massive achievement for the whole Armenian entrepreneurship ecosystem which will receive substantial visibility and acclaim. Congratulations to all.” said Nejdeh Hovanessian, national coordinator of EWC Armenia and assistant director of EPIC.

To date, Denovo Sciences has already received $750,000 in-kind services and support, including from top service providers in the field,  like AWS, Segment, Brex, Hubspot, and others. It will compete in a live event with the other 24 finalists in the last stage of the competition.

The Entrepreneurship and Product Innovation Center is a platform of the American University of Armenia for promoting entrepreneurial education, cross-disciplinary collaboration, and startup venture incubation. EPIC provides an ecosystem for emerging entrepreneurs consisting of first-class facilities and collaborative workspace, programs and events, and a network of mentors, advisors, and investors. EPIC fosters the understanding and application of entrepreneurship in students and faculty at AUA to craft high-impact multidisciplinary ventures.

A Tribute to the Life and Work of Bedros Alahaidoyan