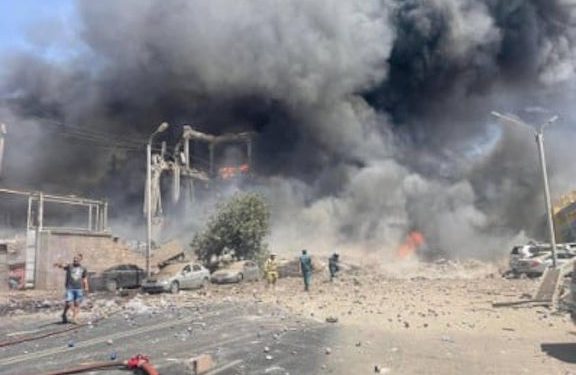 A massive explosion at a Yerevan shopping center on Aug. 14 killed 16 people and injured dozens more

A powerful explosion rocked the Surmalu shopping center in Yerevan, killing three people and injuring 61 others, Armenia’s emergency situations authorities reported on Sunday, adding later in the night that at least 25 people are unaccounted for.

Of the 25 missing, six have been found, according to Hayk Kostanyan, a spokesperson for the Emergency Situations Ministry, which said it is continuing to search area for the remaining 19 missing people. Two of the deceased have been identified as Anahit Mkhitaryan, Misak Markaryan and Jemma Nazaryan.

Authorities reported that the fire has been extinguished, but warned of threat that the building where the explosion and fire occurred could collapse.

Firefighters and emergency crews were working well into the night to extinguish the blaze, which stated when a massive explosion took place at around 1:30 p.m. local time.

Authorities announced that a second person was killed, when the body of woman was pulled from the rubble of the building. Authorities said that 60 people were being treated at various medical centers around Yerevan, with 36 people reported to be moderate condition, while 22 have already been discharged, according to Public Radio of Armenia.

The blast reportedly started at a fireworks depot. A cause has not yet been determined.

At around 4:46 p.m. local time, the National Center for Crisis Management received information about explosive devices installed in all metro stations, important military and civilian facilities, in all shopping malls, in the zoo, at Baghramyan 19 and at St. Grigor Lusavorich Church.

Authorities began evacuating those sites upon receiving the threat. An investigation is underway.

The market blast occurred hours before the threat of explosives was received. There have been no other incidents reported.

A fire broke out in the same shopping center in April 21, burning warehouses where toys and household goods were being stored. No injuries were reported in that fire.