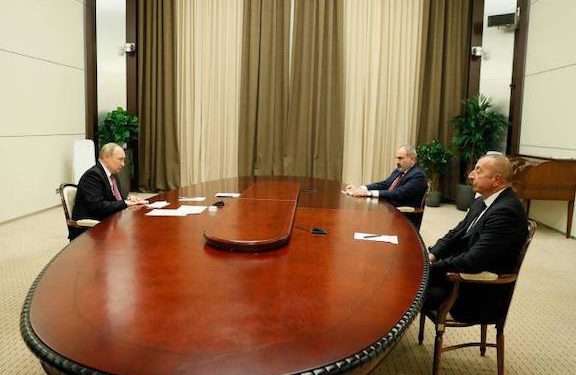 Russian President Vladimir Putin (left) with the leaders of Armenia and Azerbaijan, Nikol Pashinyan and Ilham Aliyev (right) in Sochi on Nov. 26

A meeting between the leaders of Armenia, Russia and Azerbaijan concluded Friday night in Sochi, with the Russian President Vladimir Putin summarizing the meeting as taking place in a “constructive atmosphere.”

The Russian leader told reported that he, along with Prime Minister Nikol Pashinyan and President Ilham Aliyev of Azerbaijan discussed the current situation in the region, specifically the Karabakh conflict settlement. The three leaders issued a joint statement following the meeting.

“We worked very constructively today. There has been an in-depth analysis of the current situation, we assessed the work of the Russian peacekeepers, border guards, de-mining specialists who ensure the permanent return of people to their settlements,” Putin said.

Putin also highlighted the three areas on which the leaders reach agreements.

“The first is to create demarcation and delimitation mechanisms between the two states by the end of the year. I hope it will happen as soon as possible with no obstacles,” said Putin.

“The second is a very sensitive issue related to humanitarian matters. Here we have also recorded progress,” added the Russian leader, without providing specifics.

“And thirdly, we spoke in great detail about economic issues, the development of economic ties, and first and foremost, discussed the unblocking the transport corridors as a first step. This refers to both the railway and the road links. I think we should thank our Deputy Prime Ministers, who have been working on this for a long time. Next week they will gather in Moscow to make some summaries and announce the decisions we have agreed on today,” Putin summarized.

“We have come together here to prevent any tragic incident at the border and to move forward,” Putin reportedly told Pashinyan, adding that all the countries in the region are interested in progress in that aspect.

“I hope that the agreements reached today will develop in a positive way in the near future and will be implemented as soon as possible,” Putin said.

At the start of the meeting, Putin told the Armenian and Azerbaijani leaders conditions are being worked out for “peaceful life in Karabakh in the future,” Armenpress reported. At the same time, Pashinyan reminded Aliyev about the return of prisoners of war and other captives from Azerbaijan.

The meeting, which was announced on Wednesday, will touch on issues related to the so-called unblocking of transport links between Armenia and Azerbaijan, in what the Kremlin called earlier Friday the “restoration of trade, economic and transportation communications.”

Before the meeting Putin held a one-on-one meeting with Aliyev, during which the Russian leader touched on the settlement of the Nagorno Karabakh conflict and border incidents, said the Kremlin, whose spokesperson Dmitry Peskov said that Putin and Pashinyan will meet separately following the tripartite meeting currently underway.

“The meeting as a whole aims at summing up the results of the last year after the signing of the trilateral statement on cessation of fire on November 9, 2020, to see what has been done and what could be done to move forward the peace process in the future, how to promote the further normalization process between the two countries in general. We hope that at that meeting the leaders of the three countries, who signed that statement, will outline these prospective directions”, Russian Deputy Foreign Minister Andrei Rudenko told TASS.

The top diplomat added that there are still well-known issues in the Nagorno Karabakh settlement process.

“They relate to the unblocking of transportation communications, the delimitation of the Armenian-Azerbaijani border, where, unfortunately, we witness some armed incidents from time to time, and even people are being killed,” Rudenko said.

Pashinyan and Aliyev are also scheduled to meet in Brussels on December 15 in talks mediated by the President to the European Council, Charles Michel.

Over $12 Million Raised for Humanitarian, Civilian and Infrastructural Relief During Armenia Fund Telethon