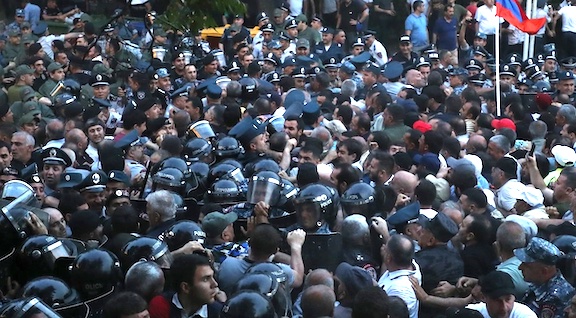 YEREVAN (Azatutyun.am)—Police fired stun grenades and made many arrests late on Friday in fresh clashes with opposition supporters who continued to demonstrate in Yerevan to demand Prime Minister Nikol Pashinyan’s resignation.

The violence which opposition leaders blamed on security forces also left dozens of people injured. At least 42 protesters and police officers received medical aid in hospitals, according to the Armenian Ministry of Health.

The clashes broke out as thousands of protesters marched through the city center after the country’s main opposition forces failed to push through the Armenian parliament a resolution rejecting any peace accord that would restore Azerbaijan’s control over Nagorno-Karabakh.

The draft resolution also demanded that Pashinyan’s government refrain from making any territorial concessions to Azerbaijan as a result of a planned demarcation of the Armenian-Azerbaijani border. It said the demarcation process must also be linked to the release of all Armenian prisoners remaining in Azerbaijan and the withdrawal of Azerbaijani troops from Armenian border areas occupied last year.

Lawmakers representing the ruling Civil Contract party boycotted an emergency parliament session on the resolution and thus prevented the National Assembly from making a quorum. They again accused the opposition of exploiting the Karabakh conflict for political purposes.

Opposition leaders condemned the boycott, saying that it proves their claims that Pashinyan is intent on helping Azerbaijan regain full control over Karabakh.

“Therefore, if we don’t want Artsakh (Karabakh) to end up under Azerbaijani rule we must oust these authorities,” one of them, Armen Rustamyan, told reporters in the parliament building guarded by an unusually large number of police and other security personnel.

Shortly after the boycott, Rustamyan and other opposition figures led a crowd of supporters to the prime minister’s office in Yerevan. The protesters blocked all entrances to the building for about two hours before marching towards Pashinyan’s official residence.

They were confronted by hundreds of riot police deployed at a street intersection outside the residence.

The violent clashes broke out there after the opposition leaders and their supporters were not allowed to march to the nearby parliament building.

Security forces used stun grenades as some angry protesters tried to break through the police cordon. Scores of protesters were arrested as a result.

The police did not immediately give the total of number of arrests. Opposition lawmakers told RFE/RL’s Armenian Service that one of their colleagues, Artur Sargsyan, was among the detainees.

Senior police officers at the scene defended the use of force. They said that some protesters threw stones at policemen.

Ishkhan Saghatelyan, the main speaker at the more than month-long opposition rallies, blamed the security forces for the violence when he addressed later in the evening supporters who gathered in the city’s France Square, the site of a tent camp set up by the opposition on May 1. He urged the demonstrators to spend the night in the square.

“Today Nikol once again declared war on his own people,” charged Saghatelyan. “We accept your challenge and we are ready to defend ourselves.”

Saghatelyan also said that the daily anti-government protests will continue unabated. “We will fight till the end,” he said.