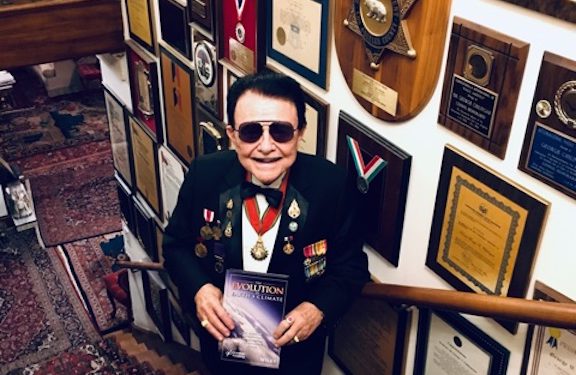 The Society of Petroleum Engineers (SPE) recently honored Professor George Chilingarian with the “Honorary Member” award at its annual Technical Conference and Exhibition. The conference was held on September 21 to 23, in Dubai.

The Honorary Membership award is the highest honor that SPE presents to an individual and is limited to 0.1 percent of SPE’s entire membership.  The award recognizes Professor Chilingarian’s 65 years of sustained and significant contributions in carbonate reservoir characterization, petroleum engineering, and petroleum geology education and mentoring

SPE serves more than 160,000 members worldwide, sharing technical knowledge for the benefit of oil, gas, and geothermal industry. Each year, SPE presents several awards to recognize members whose efforts have advanced petroleum technology, as well as their professional achievements and contributions to the industry. These international awards winners are nominated by their colleagues and selected by their peers for their achievement and contributions.

Dr. Chilingarian is an Armenian-American born in Tbilisi, Georgia in 1929. He received his Bachelor’s Degree (1949) and Master’s Degree (1950) in Petroleum engineering, and his Ph.D. (1956) in Geology with a minor in Petroleum engineering at the University of Southern California. While he was working on his Ph.D. at USC, he spent four years in the U.S. Air Force, where he made scientific breakthroughs in aviation jet fuel storage in the shallow salt domes. This was very well received by the Air Force, where he was given the position of Chief of the Petroleum and Chemicals Laboratory at Wright Patterson Air Force Base, Ohio.

Dr. Chilingarian is an internationally acclaimed ambassador in academia in general, and particularly in petroleum profession. His ability to venture into science and engineering with unique and unparalleled dexterity is extremely rare. One of Professor Chilingarian’s visions was to bridge the gap between engineers and geologists. For the last twenty years, even some of the most stubborn petroleum engineering companies have realized the potential of such interdisciplinary teamwork.

Dr. Chilingarian had started to “marry” geology and petroleum engineering several decades prior to the “modern-day fad” for interdisciplinary projects. The record of his efforts clearly show that he has accomplished this vision. He was also the recipient of the SPE Distinguish Member Award in 2019.

Dr Chilingarian is the author and/or co-author of 75 books and more than 500 publications. As one colleague stated: “George has written more books than most people have read. He has more trophies in his home than Heritage Hall, and he speaks more languages than anyone I know.”

That is the essence of Dr. Chilingarian’s long and illustrious career. Many of Professor Chilingarian’s former students are now serving as CEOs and executives of large petroleum companies in the USA, China, Taiwan, Thailand, Iran, Saudi Arabia, Egypt, India, Mexico, and Brazil. Dr Chilingarian’s technical findings resulted in the discovery of an oilfield in the Middle East in Asmari Limestone of Iran, which was named after him “Chilingar.”

In 2008, Dr. Chilingarian was honored with a Lifetime Achievement Award from Viterbi School of Engineering at USC. He is an Academician, USC International Ambassador; Member of the Russian Academy of Sciences; Founder & Past President of the Russian Academy of Natural Sciences USA Branch; Honorary Professor of Gubkin University, Russia; and Honorary Consul of Honduras in Los Angeles, for several years.

Dr. Chilingarian is the recipient of over 100 medals, awards, and diplomas from various governments, universities, and organizations, including Lomonosov’s medal of Russian Academy of Sciences: Order of Homayun Gold Medal from the late Shah of Iran, and White Elephant Medal from King of Thailand. In 2019, he received SPE’s Distinguish Member Award.