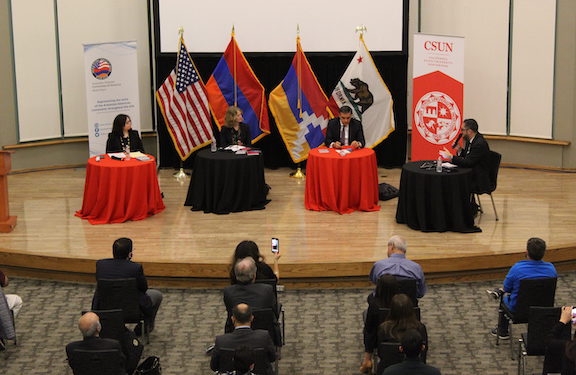 A scene from the panel discussion held at CSUN

LOS ANGELES—Human Rights Defender of the Republic of Armenia Dr. Arman Tatoyan has concluded his trip to California at the invitation of the Armenian National Committee of America – Western Region following a successful two weeks in which he engaged in meetings with community officials, elected officials, media and academic circles to report on the latest developments in the region.

Dr. Tatoyan’s trip kicked off with a meeting with the ANCA-WR Board of Directors and staff during which the discussion centered on the role which Diaspora organizations and communities can play in helping to secure the future of the Armenian Homeland.

Several meetings with elected officials and government representatives also led to an exchange of concrete solutions and ideas on how the U.S. may use it influence to secure human rights for Armenian civilians and POW’s and help facilitate peace in the region, while simultaneously addressing the rising wave of armenophobia in the U.S.

Along these lines, Dr. Tatoyan held meetings with Congressmember Adam Schiff, during which he briefed the Congressmember on the recent Azeri invasion into Armenia’s eastern border, the illegal deployment of Azeri forces on the roads between Armenia’s towns and villages which endanger people’s lives and well-being, the unlawful detention of POWs, and the importance of international pressure for accountability. Dr. Tatoyan further thanked Congressmember Schiff for his recent statement about the attack and for his unwavering support for justice for the Armenian Genocide and a secure and prosperous Armenia and Artsakh. Congressmember Schiff asked many important questions and thanked the Ombudsman for the information, reaffirming that he will continue working with his colleagues to ensure that Azerbaijan is held accountable for its  ongoing war crimes.

Dr. Tatoyan also met with the Lieutenant Governor of the State of California Eleni Kounalakis, San Francisco Board of Supervisors Aaron Peskin, Myrna Melgar, and representatives of the San Francisco Mayor’s office. During these meetings, he provided a briefing on Azerbaijan’s latest acts of aggression against Armenia and its incitement and export of Armenophobic violence – noting how this global wave of anti-Armenian violence had reached the Armenian community in San Francisco.

Dr. Tatoyan met with the Los Angeles Civil + Human Rights and Equity Department, a newly established agency in the City of Los Angeles focused on addressing discrimination and injustice across the city’s diverse communities. Meeting with the department’s executive director Capri Maddox, Dr. Tatoyan discussed the threat of hate crimes against the Armenian community emanating from the state-sponsored incitement of anti-Armenian sentiment by the governments of Turkey and Azerbaijan – noting the spate of Armenophobic hate crimes across the world, including in San Francisco.

On the media front, the ANCA-WR facilitated interviews for Dr. Tatoyan and RT America, where he discussed Azerbaijan’s incursion into Syunik and the capture of 12 Armenian prisoners of war. Dr. Tatoyan highlighted Azerbaijan’s repeated refusal to abide by ceasefire commitments, the immense human impact Azerbaijan’s ongoing aggression against Armenia has had on civilian populations, and the threat posed by Azerbaijan’s propagation of anti-Armenian sentiment.

Individual interviews were also arranged with foreign policy expert and political commentator Hagar Chemali for her “Oh My World!” show and Araksya Karapetyan of KTTV Fox 11 News, as well as Asbarez News, Horizon Armenian TV, USArmenia, PanArmenian television, and Zartonk Media. Dr. Tatoyan also spoke at a press conference to local and community media, providing a report on the Armenia-Azerbaijan border as well as presenting on his latest reports on Azerbaijan’s torture and abuse of Armenian prisoners of war and civilian captives.

Dr. Tatoyan’s trip also included a series of meetings with the ANCA-WR’s coalition partners, including Ramond Takhsh, Board Member of the Assyrian Policy Institute, which focused on the Assyrian Community of Armenia – the effects of the economic downturn following the pandemic on Armenia’s Assyrian community, the impact and sacrifices of the Assyrian community during the 2020 Artsakh war, and other issues related to political participation. Dr. Tatoyan emphasized that as the Human Rights Defender of Armenia, the human rights of Armenia’s minorities – including Armenia’s significant Assyrian community – was an utmost priority. In turn, Takhsh thanked Dr. Tatoyan for his diligent work as Human Rights Defender and expressed his profound thanks for Armenia’s role as one of the few safe havens for the Assyrian people in the world today – emphasizing the inextricable links between the Armenian and Assyrian people.

Within the Armenian community, Dr. Tatoyan visited the sites of the anti-Armenian attacks at the Krouzian-Zekarian-Vasbouragan Armenian School and the community center adjacent to the St. Gregory the Illuminator Armenian Apostolic Church in San Francisco. The KZV Armenian school was the site of two separate incidents – an vandalism attack where anti-Armenian graffiti was plastered around school property, and a drive-by shooting of school property after hours – while the church community center, which housed the offices of the ANCA’s San Francisco chapter as well as other local community organizations, was severely damaged in an arson attack. The northern California leg of his trip culminated with a Town Hall Meeting in San Francisco, where he updated the community on recent developments in Armenia and presented information from his fact-finding missions.

In the Los Angeles area, Dr. Tatoyan headlined an ANCA-WR community town hall in partnership with the Armenian Youth Federation where he reported on the recent developments in Armenia and fielded a multitude of questions from the audience on a wide range of subjects, from Azerbaijan’s obligations under international law to protect the human rights of civilians and prisoners of war, to the need to establish a demilitarized security zone in the vicinity of villages in proximity to Azerbaijan’s military outposts.

Dr. Tatoyan also visited the Rose and Alex Pilibos Armenian School in Little Armenia where he spoke to high school students about his role as the Human Rights Defender. Pilibos scholars asked him a series of questions regarding the rights of women and children in Armenia, the recent Azeri invasion into the sovereign territory of Armenia, and the rights of citizens in bordering villages. Dr. Tatoyan also had a chance to visit a classroom, where elementary students gave him hand-written cards thanking him for his selfless work.

The main event of Dr. Tatoyan’s trip was the ANCA-WR’s Grassroots Luncheon on Sunday November 21st, hosted at the iconic Beverly Hilton Hotel where he was awarded the ANCA-WR’s “Human Rights Champion” Award in front of a sold-out crowd for his tireless pursuit of justice for the people of Armenia and the victims of Azerbaijan’s war crimes. Dr. Tatoyan was also presented with commendations by Senator Anthony Portantino on behalf of the Senate of the State of California and by the Los Angeles County Board of Supervisors for his service to the Armenian nation. In turn, Dr. Tatoyan expressed his appreciation for the work of the ANCA-WR, presenting a certificate to the ANCA-WR, as well as to distinguished community members and legal experts Garo Ghazarian, Esq. and Karnig Kerkonian, Esq. for their enduring support of the Ombudsman’s office and for their efforts to hold Azerbaijan legally accountable for its violations under international law.

The next evening, Dr. Tatoyan participated in a panel discussion with leading international legal experts on the topic of justice and accountability in the wake of the Artsakh war that took place at California State University, Northridge and was co-hosted by the ANCA-WR, the University of California, Los Angeles Promise Armenian Institute, the UCLA Promise Institute for Human Rights, and CSUN’s Armenian Studies Department. Dr. Tatoyan was joined in conversation by Kate Mackintosh, executive director of the Promise Institute for Human Rights at the UCLA School of Law; Rajika Shah, director of the Genocide Justice Clinic at Loyola Law School; and Karnig Kerkonian, a seasoned international lawyer and legal counsel on Armenia’s case against Azerbaijan at the International Court of Justice.

The extensive discussion examined a range of challenges associated with the justice and accountability process, the importance of international monitoring and reporting, a comparative study between the case of Artsakh and other examples of remedial secession and the prosecution of racially motivated war crimes, and the opportunities at Armenia’s disposal to hold Azerbaijan accountable for its violations of international law.

Dr. Tatoyan returned to Armenia on Sunday, November 28 and immediately embarked on a fact-finding mission to the Syunik province to investigate the crisis situation along the border.