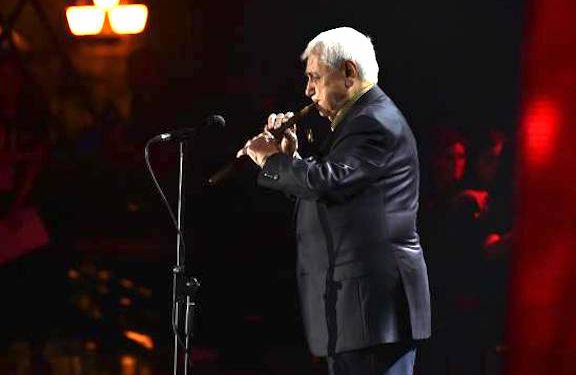 World-renowned Armenian duduk virtuoso Jivan Gasparyan, who introduced the ancient Armenian instrument to the world, passed away on Tuesday. He was 93.

The news of his death was reported by his grandson, Jivan Gasparyan II, who wrote in a Facebook post that “The world has suffered an unimaginable loss tonight.”

“He was not only an icon, but a beautiful soul. May he rest in peace,” the junior Gasparyan, himself a duduk player wrote on Facebook.

Born in the village of Solak, Armenia to parents from Mush, Gasparyan started to play duduk when he was six. In 1948, he became a soloist of the Armenian Song and Dance Popular Ensemble and the Yerevan Philharmonic Orchestra.

He has won four medals at UNESCO worldwide competitions (1959, 1962, 1973, and 1980). In 1973 Gasparyan was awarded the honorary title People’s Artist of Armenia. In 2002, he received the WOMEX (World Music Expo) Lifetime Achievement Award. He is a Honorary citizen of Yerevan.

A professor at the Yerevan State Musical Conservatory, he instructed and nurtured many performers to professional levels of performance in duduk.

In 1998 he released an album with a unique duduk quartet he formed. Creating arrangements for four musicians with “new duduk tones, alto and bass, was an extremely difficult task” and challenge, but the quartet did become a reality performing and “there is no other like it in the world”, he witnessed in the lines notes of Nazeli.

He has toured the world several times with a small ensemble playing Armenian folk music. His music has been chosen on the soundtrack of several international films.

He has collaborated with many artists, such as Sting, Peter Gabriel,  Hossein Alizade, Michael Brook, Lionel Richie, Hans Zimmer and many others.

He also recorded with the Kronos Quartet and the Los Angeles Philharmonic.