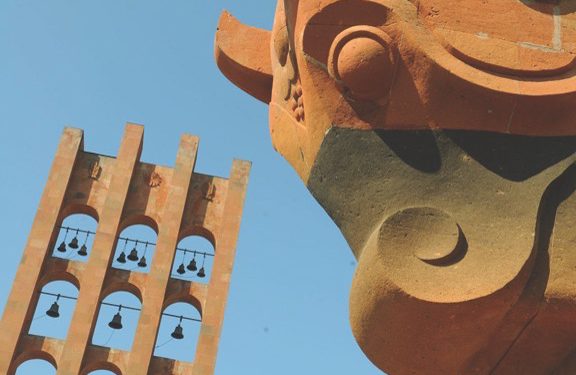 It was a bleak time in history for Armenians in 1918. Centuries of oppression by Ottoman rulers had manifested into full-blown Genocide on the Western front, while the Bolsheviks who toppled the Russian Czarist regime that ruled over Armenia’s Eastern front had their own plans to oppress through invasion and integration. The time had come to fight for independence or risk being absorbed by the powers that had wrought havoc on the Armenian Nation for centuries.

This might be simplifying a complex geopolitical reality facing Armenians in May 2018, but the need to be independent from foreign rule was born out of a national agenda that sought to bring together all Armenians on our ancestral soil and allow them to determine for themselves their own fate and destiny.

Being in service to the people, the Armenian Revolutionary Federation rose to the challenge and carried the mantle of independence, making it a national mandate to organize Armenians from all over the world to fight for our homeland.
The valiant and heroic efforts of those who fought for independence 102 years ago in the battles of Sardarabad, Bash-Abaran and Gharkiliseh established the first Republic of Armenia and made the dream of Armenia’s Independence a reality.

The victories on May 28, 1918 were rooted in a national ideology that while advancing the universal concepts of freedom and self-determination were uniquely Armenian in nature and every decision taken the government at the time was grounded in the firm belief of advancing justice, security and prosperity for every Armenian.

The national agenda at play in 1918, once again, became a driving force 70 years later with the spark of the Artsakh Liberation Movement in 1988 and guided the Armenian Nation to victory when Artsakh was liberated and declared itself an independent state.

Today, the Republic of Armenia, having regained independence in 1991, has become the nexus for our national aspirations. That is why now, more than ever, a national agenda is needed to regroup our nation and ensure that every Armenian—wherever they might be—is a soldier for the homeland and will fight for the national interests of Armenia and its people.

When Armenia became independent again in 1991, its leaders sought to marginalize the people and make themselves the beneficiaries of our national wealth, causing detrimental damage to nation-building efforts and the creation of a national agenda, which prioritizes the individual Armenian as the critical focal point in advancing national interests. Taking a page from the Soviet playbook—or not ridding themselves from it—successive governments looked at the population as being dispensable—and at times disposable—in their self-serving mission to amass personal wealth at any cost.

So, 100 years after Armenia’s Independence, when the people of Armenia rose up to reclaim their destiny and homeland by toppling the despotic regime, a new opportunity was born for Armenians around the world to engage in advancing the homeland and ensuring the development of a more just and equitable society that can thrive and persevere.

Today, however, some remnants of the previous regime are leveraging the wealth they usurped from the people to create obstacles for the advancement of the nation in hopes of staging a comeback and reestablishing their egregious rule.

Since the people’s movement in 2018 that ushered in a new government there have been positive changes in Armenia, the most important of which is the optimism of its people who are now vested in the future of the country. However, there have also been steps taken by the new government that harken back to the divisive methods of past leaders, which will only alienate the vary people the movement empowered.

We cannot afford to squander the opportunity that the people of Armenia created for our entire Nation in 2018 through the popular movement. The current government is no longer “new” and must be held accountable for its actions and equally praised for its positive advancements. Our criticisms of the regime must be mature and come from a place of strengthening our nation and not sowing enmity. The same applies to government representatives who, sometimes, have used their position to create factionalism that has no place in our society.

One thing is certain: there is no going back to the past. This means that every Armenian must work toward the strengthening of the republics of Armenia and Artsakh, thus ensuring its security and social justice for its people. Together we must demand a national agenda that is free of Soviet vestiges and not only serves the individual Armenia, but also advances historical justice that can only propel a future United, Free and Independent Armenia.

`As we mark the 102nd anniversary of Armenia’s independence and we recall the decisive victories that created our country—and continue to embolden those today who are protecting our borders in Artsakh and Armenia—we must recommit ourselves as soldiers of the nation and work collectively to overcome challenges and celebrate new victories.