Editorial: Preserving Artsakh’s Sacred Independence Must Become a Call to Action for Every Armenian 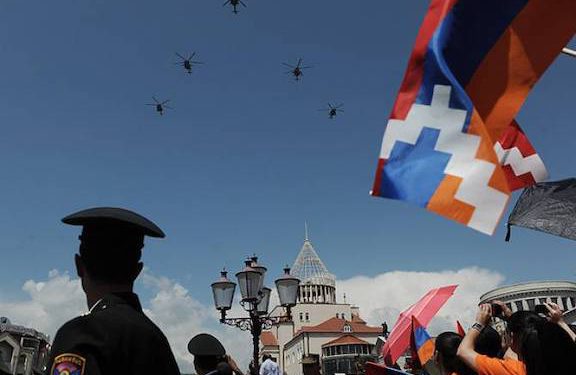 The events of the past month have proven that everything we, as a nation, struggled for is fleeting because for the last two years our enemies—the Azerbaijanis and the Turks—have become emboldened to flex their military muscle and pressure concessions at the expense of Armenian lives.

The ethnic cleansing campaign that accelerated when Azerbaijan—with the overt assistance of Turkey—launched an aggressive attack against Artsakh aims to tear away at our historic homeland, carrying out a campaign that was waged more than a century ago on Armenia’s western front.

We mark the 31st anniversary of Artsakh’s declaration of independence on September 2, 1990 against the backdrop of unimpeded violence and hatred against Armenians and merely days after the death of Mikhail Gorbachev, the architect of the very policies that gave the people of Artsakh the courage to exercise their right to self-determination.

Last month began with another brazen attack by Azerbaijani forces against the Armenian population of Artsakh, which claimed two more lives, and ended with the same population being evicted from their homes in Berdzor and the surrounding Aghavno and Sus villages.

The 44-Day War has thrust Armenians into an untenable situation that has to remind us just how sacred the independence and liberation that were won with the blood of our brethren are, as our enemies work to erase any reference to Artsakh—and even Armenia—from the map.

Today, that independence is threatened and the possibility of another commanding victory seems out of reach. Almost two years after the end of the 44-Day War, every Armenian is attempting to make sense of that mammoth blow to the gut that was the November 9, 2020 agreement, based on which the lands we won back, cherished and called our ancestral home were forcibly surrendered to the enemy in a remarkable defeat not seen in generations.

Artsakh and Armenia also have found themselves at the center of a larger conflict between the West and Russia, each of which are using Armenia and the situation created by the war to protect their interests in the region with reckless disregard toward the people who call that area home.

Russia, which continues to proclaim that it is Armenia’s “strategic ally,” effectively sat back and allowed Azerbaijan to trample upon Artsakh and even invade parts of Armenia without lifting a finger. The European Union and the United States seem to have forgotten their own motto of justice, democracy and independence and could care less that the people of Artsakh, in 1990, exercised the same basic principles, which today guarantees their citizens life, liberty and the pursuit of happiness.

All of this has happened while the government of Armenia has, at every step, capitulated, and other political forces in Armenia have been busy pointing fingers and looking for enemies from within, while it is abundantly clear that our enemies continue to remain Turkey and Azerbaijan.

It is the time for the Armenian Nation to sober up.

So lets us all—every Armenian around the world—rise up. This anniversary of Artsakh’s independence must become a crucial springboard to gather our strength and recommit ourselves to Artsakh, because our hard-won independence cannot—and must not—be compromised and it must be preserved at all costs.