EDITORIAL: Women Are Catalysts for a Stronger Society, Homeland and Nation 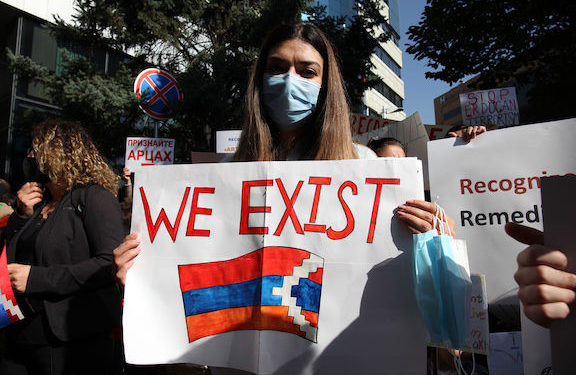 Women from Artsakh call for peace and end to Azerbaijan aggression in Oct. 2020 (EVN Report photo)

March 8 is International Women’s Day. It is a day of celebrating and honoring the accomplishments of women, but it also should serve as day for society as a whole to reflect on—and possibly make amends—for the myriad ways women’s rights continue to be curtailed around the world.

Here, in the United States, we are witnessing a deliberate and systematic attack on women’s rights, setting the clock back on all women have achieved for four or more decades through activism, empowerment and education. State after state are passing legislation—mostly authored by men of a certain race, age and religious affiliation—that is not only an affront to women, but impact their right to choose. Income inequality continues to impede women from making their mark in business, raising their families and other sectors in society.

It is ironic, because by some accounts, the International Women’s Movement had its genesis here in the United States, which proclaims to be the world’s most democratic and progressive country. Yet women had to fight for their inalienable right to vote at a time when other countries—including Armenia—welcomed women’s participation in the political and civic processes.

Today, however, it is a different story in Armenia. The Soviet yoke, coupled with the fact that successive administrations that have ruled the country—including the current one—have not lifted a finger to elevate women to their rightful place in civic, societal and political life. One of the most egregious examples of this was when a bill about creating mechanisms to counter and fight domestic abuse was being debated in parliament a few years back and lawmakers—all men—were opposing the measure calling it a threat to the “traditional Armenian way of life.”

The situation isn’t any better within our Armenian organizations. While women are relegated to organizing social events, the men are the ones making the decisions and setting strategies for advancing the mission of the said groups. There is reticence—and outright rejection—by these men to include women in leadership positions, because as much as they would prefer to exude and profess an image of progress, they are guided by the same draconian principles and customs that prompted the aforementioned lawmakers to oppose measures that would improve not only women’s quality of life, but also their stature, creating a more inclusive society. One organization opted to proudly announce—on March 8—the election of a new governing body that was devoid of women and comprised of all men with a median age of 65.

Yet it was mainly women who were the civilian targets by Azerbaijan during the 2020 Artsakh War. It was the women who had to ensure that the children and the elderly were protected from the wrath of our enemies. And, today, it is the women who carry out the legacy of our heroic soldiers, all the while living in unfathomable socio-economic conditions and whose fates hang in the balance—dependent largely on men who are the decision makers.

There is one important and obvious fact: None of us would be here without a woman giving birth to us.

On this International Women’s Day, we must not only celebrate and honor women, but also work collectively to ensure that their inalienable rights are protected and their crucial role is elevated and harnessed so we may have a stronger society, homeland and Nation.