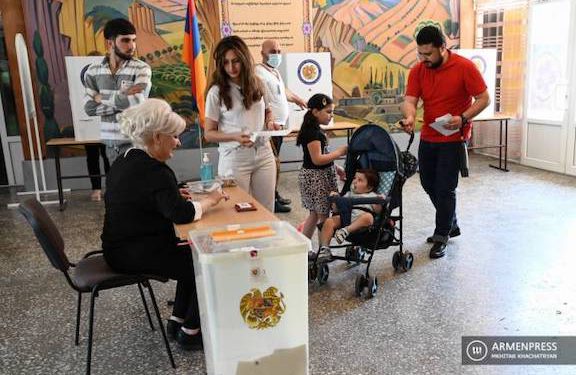 While not clearing the 7-percent threshold set for alliances to enter parliament, Pativ Unem has been allowed to be represented in the next parliament as the force that finished third in the race.

According to the Central Electoral Commission, the results will translate into 71 seats in parliament for Civil Contract, while Hayastan and Pativ Unem will control 29 and 7 mandates in the 107-seat National Assembly.

The alliances of the two former presidents as well as the Zartonk National-Christian Party, which did not clear the 5-percent threshold for political parties, had applied to the Central Electoral Commission with a demand to declare the election results invalid.

Presenting their grievances, the opposition groups claimed that the alleged violations had a significant impact on the vote results.

They, in particular, claimed that Pashinyan violated the constitution by continuing to act as prime minister after May 10 when the Armenian parliament was dissolved. They also referred to the alleged use of administrative resources by the ruling party, Pashinyan’s “hate speech” and “calls for violence” during the election campaign, prosecutions against opposition members and other alleged violations on election day that they claimed had an impact on the outcome of the vote.

The Central Electoral Commission rejected the demands of the opposition groups, reaffirming the results of the vote.

The Kocharian-led Hayastan Alliance has said it will challenge the election results in the Constitutional Court.

Both opposition alliances say they have not yet made their final decision on whether they will pick the mandates.

International observers gave largely a positive assessment of the Armenian authorities’ handling of the parliamentary elections in their statements that followed the June 20 vote.
In an interview with RFE/RL’s Armenian Service late last week, Eoghan Murphy, head of the OSCE/ODIHR election observation mission in Armenia, said that incidents observed by them during Armenia’s snap parliamentary elections did not impact the validity of their results.

“It was a competitive election. People could campaign freely, candidates were able to go and organize events and they organized events. But also the voters had choice in the number of parties running and voters were able to attend events if they wanted to attend events. And when it came to election day, people were able to go out and vote in a well-managed process where they could cast their vote, and that vote would be both respected and reflected in the overall results,” Murphy said.