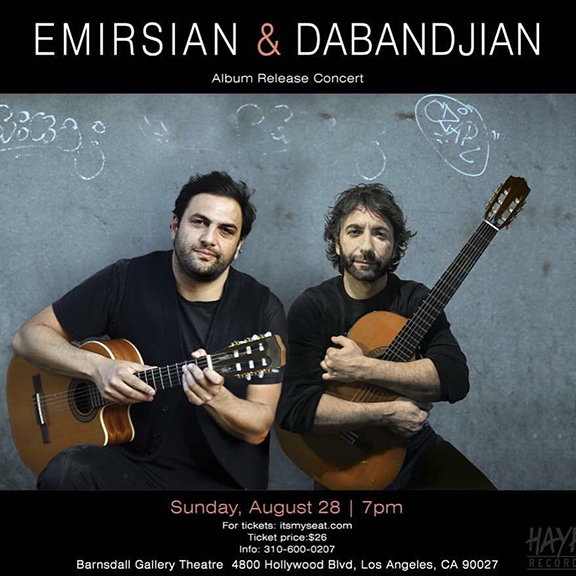 HOLLYWOOD—Emirsian & Dabandjian will give a live performance featuring compositions from their debut album, “Փափաք” (Papak), due to be released at this concert on Sunday, August 28th at 7pm at Barnsdall Gallery Theatre.
This is truly a collaborative project in all sense of the word; two friends collaborating with the spirit of another friend, Parsegh Topjian, whose love of the Armenian culture and specifically Armenian music was the inspiration for this set. The seed was planted when Aren Emirze and PArsegh decided to put music to poems written in the Western Armenian dialect, mostly during the turn of the century. The circle was completed when another friend, Ara Dabandjian, joined the group and the project took off. Parsegh’s untimely death shook the two friends to the core, however they decided to continue and fulfill Parsegh’s vision.
The Project is a labor of love on so many levels. It revives some of the most exquisite lyrical Armenian poems written during one of the most harrowing times in Armenian history.
Both Ara and Aren play the guitar and sing, breathing life into verses written some hundred years ago by poets who will die only when they are not remembered.
Ticket prices are $26, reserved. Tickets are available on itsmyseat.com or by contacting Paola Kassabian at (310) 600-0207